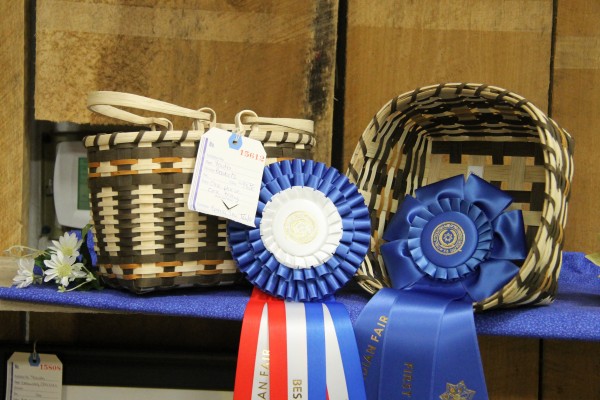 The first planning meeting for the 104th Cherokee Indian Fair was held on Monday, April 13. Exhibits, such as the ones shown in the photo taken at last year’s Fair, are being planned as well as many activities. (SCOTT MCKIE B.P./One Feather)

Items discussed at the initial meeting included progress on a theme for the Fair. The committee is soliciting theme ideas by running a contest for EBCI tribal members.  The winning theme writer will receive $100. The theme will be selected by the Fair Committee after the submission deadline of April 30. Submissions may be taken to the Cherokee Welcome Center (828-359-6491) or the Cherokee Indian Fairgrounds (828-359-6492).

The EBCI Cooperative Extension Office and Qualla Arts and Crafts will continue to coordinate the community and individual entries and displays in the Exhibit Hall. Janet Owle and Tammy Jackson, representatives from the EBCI Extension Office, were present and said they would like to create the category booklet and get it to the public as soon as possible. Huskey asked that they coordinate with Kristy Herron, from the Department of Commerce, with regards to the category booklet.  Owle also indicated that the livestock activities would also be a part of the upcoming Fair, and stated that she hopes to have eight or nine community display booths in the exhibit hall this year.

There was also discussion of temporary labor for the days. Organizers were asked to bring an estimate of the number of workers they would need to the next meeting.

The committee spent some time discussing financial procedures, and Huskey provided direction with regard to documenting and reporting for day organizers and requested that reports be provided by the EBCI Extension Office and Qualla Arts and Crafts when pay outs were made to communities and individual entry winners.

James Welch brought up several points concerning stickball games at the Fair. Huskey assessed that more of the stickball player leadership would be needed to address issues and ensure safety at the Fair, and she related she will schedule a separate meeting for that purpose.

The committee addressed questions regarding the starting time of each day. Some of the day organizers urged the committee to consider opening earlier so that additional activities could be included. Huskey is reviewing those requests for further discussion at the next meeting. Organizers wanted to know how the pageants would roll out this year and how timing of the activities could be improved to eliminate dead stage time and, in some cases, activities overlapping as some ran longer than originally planned. Huskey said she would reach out to the Pageant Committee to request that they attend the next meeting or send a representative.

Hernandez announced that future Cherokee Indian Fair Committee meetings would be held on the third Monday of each month until further notice. The date for the next meeting is Monday, May 18 at 5:30pm. Huskey encouraged the committee to invite community members, and anyone who is interested in helping to contribute to the success of this year’s Fair, to attend as many of these meetings as possible.

Huskey adjourned the meeting at 6:40pm.