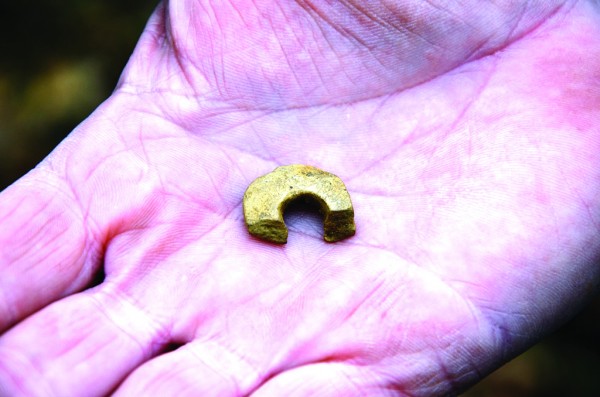 The photo shows a clay sherd, probably from a tobacco pipe, found during excavations in the Chattahoochee National Forest in north Georgia. (Photos by Holly Krake/USFS)

GAINESVILLE, Ga. – Three volunteers cheer in the cool morning air as they gather around a wooden tripod shaker loaded with hand dug soil. Excited, they pass around a small half circle sherd just discovered.

“With the smoothness of the clay and the shape, I think it’s part of a tobacco pipe,” said Dean Wood, Principal Investigator from the firm Southern Research. “Great find folks.”

Working in small groups, the archeology excavations continued for a week in March on an unusual and significant site in the Chattahoochee National Forest in north Georgia. The site dates from 100 BC to AD 1615. Six test pits were excavated centimeter by centimeter looking for pottery, stone tools, and building posts to determine who lived at the site in the 17th century and why they were there. Work at the site has been carried out in partnership with the University of Georgia, Southern Research, and volunteers from the Passport in Time program. 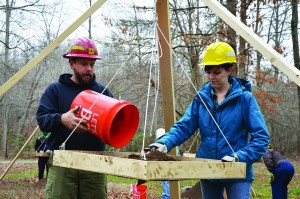 Forest Service employees work alongside volunteers to shift through soil one bucket load at a time.

“We have a lot of questions about this time in history in Georgia,” said Chattahoochee-Oconee National Forests Archeologist James Wettstaed. “Were these refugees from political instability caused by Spanish explorers, small pox plague survivors, a previously unknown group, farmers or hunters? Did a single family live here or a larger group? These are all unknowns we hope to answer through this excavation.”

Radiocarbon dating at the site obtained from burned wood dates the largest occupation at the site to AD 1600-1615. This is significant as much remains unknown in regional history between the years AD 1550 and 1650. It was not until the late 17th century that English explorers reached the area and found it occupied by the Cherokee people. This site could provide significant information on a poorly known but critical time in regional history.

“The Forest Service continues to be a leader in archeology in Georgia,” added Wood. “This site really opens new windows on Native American history at a time when the social fabric of those cultures was being ripped apart.”

A complete photo album of the excavation is available at tinyurl.com/n6czybf.