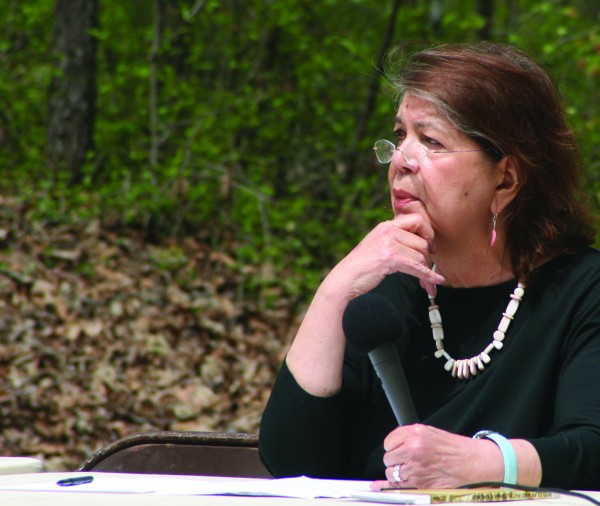 The late Wilma Mankiller, former Principal Chief of the Cherokee Nation, is one of four finalists in a voting contest being run by a group to find a replacement for Andrew Jackson on the $20 bill. (SCOTT MCKIE B.P./One Feather)

A group called Women on 20s is tired of seeing the face of President Andrew Jackson on the U.S. $20 bill, and they want to see a woman’s face replace his.  The late Wilma Mankiller, former Principal Chief of the Cherokee Nation, is one of four finalists in a voting contest being run by the group to find a hopeful replacement.

“The Year 2020 marks the 100th anniversary of the passage of the 19th Amendment that granted women the right the vote,” the organization’s website states.  “So, it seems fitting to commemorate that milestone by voting to elevate women to a place that is today reserved exclusively for the men who shaped American history.  That place is on our paper money.  And, that new portrait can become a symbol of greater changes to come.”

Joining Chief Mankiller in the finals are Eleanor Roosevelt (1884-1962), former U.S. First Lady; Harriet Tubman (ca. 1822-1913), former slave who helped many escape on the Underground Railroad; and Rosa Parks (1913-2005), civil rights leader famous for refusing to give up her bus seat.

The Women on 20s website listed Jackson’s involvement in the Indian Removal Act of 1830 as one reason to remove his image from the $20 bill.  “He also helped gain Congressional passage of the ‘Indian Removal Act of 1830’ that drove Native American tribes of the southeastern United States off their resource-rich land and into Oklahoma to make room for white European settlers.  Commonly known as the Trail of Tears, the mass relocation of Indians resulted in the deaths of thousands from exposure, disease and starvation during the westward migration.  Not okay.”

Mankiller served as Prinicipal Chief of the Cherokee Nation from 1985-95.  In 1998, she received the Presidential Medal of Freedom.

Upon her passing in 2010, President Obama commented, “As the Cherokee Nation’s first female chief, she transformed the nation-to-nation relationship between the Cherokee Nation and the federal government and served as an inspiration to women in Indian Country and across America.”

According to the Bureau of Engraving and Printing (BEP), within the U.S. Department of the Treasury, the current portraits in use on U.S. paper currency were adopted by the agency in 1928.  “Treasury Department records do not reveal the reason that portraits of these particular statesmen were chosen in preference to those of other persons of equal importance and prominence,” said BEP information.

If you wish to vote in the Women on 20s poll, visit: https://www.womenon20s.org/vote2