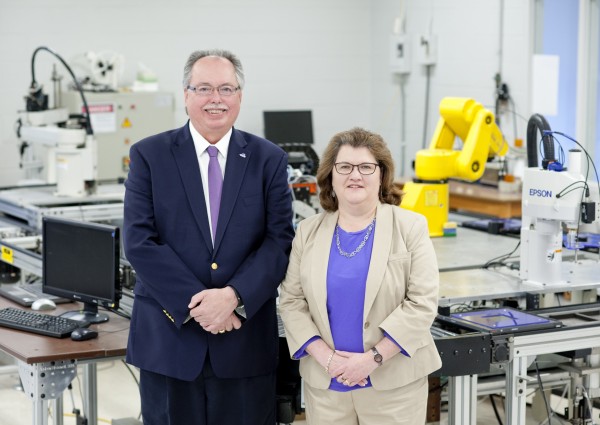 Jeffery Ray (left), dean of the Kimmel School of Construction Management and Technology at Western Carolina University, and wife Tina Hopkins Ray, who recently established a scholarship fund to provide financial support to students who have participated in FIRST Robotics competitions, visit a robotics lab on the WCU campus. (WCU photo)

CULLOWHEE – A new scholarship fund at Western Carolina University being established by the dean of the Kimmel School of Construction Management and Technology and his wife is designed to provide financial support to students majoring in science, technology, engineering or mathematics.

FIRST, an acronym meaning “For Inspiration and Recognition of Science and Technology,” is a not-for-profit public charity that designs accessible, innovative programs that motivate young people to pursue education and career opportunities in science, technology, engineering and math, while also building self-confidence, knowledge and life skills.

Jeffrey L. Ray, dean of the Kimmel School, had been involved with FIRST Robotics competitions for 12 years prior to accepting his new position at WCU last summer, and his wife, Tina Hopkins Ray, is an engineer-turned-educator who has worked with FIRST programs for the past 11 years.

“During our combined experience of 23 years with FIRST Robotics, we have seen so many benefits and opportunities given to students participating in these programs through an extensive scholarship program,” Jeff Ray said. “Our understanding of the benefits of involvement in a STEM program for middle and high school students motivated our desire to give back and promote involvement in a global STEM program.” STEM is an acronym for science, technology, engineering and mathematics.

The Rays were introduced to the FIRST program in Michigan, where Jeff Ray served as director and professor in the School of Engineering at Grand Valley State University and where Tina Ray was a volunteer coordinator.

“We were immediately bitten by the bug of the excitement of a competition that combined the excitement of an athletic event, a rock concert and STEM activities together in an event that is the varsity sport of the mind,” he said.

When Jeff Ray was named dean of the School of Engineering Technology and Management at Southern Polytechnic State University in Marietta, Georgia, in 2007, he and his wife became involved in the planning activities of the Georgia Peachtree Regional Competition and brought both FIRST Tech Challenge and Lego League competitions to campus there.

And now they are looking to launch FIRST Robotic events in Western North Carolina.

“After I accepted the position of dean at WCU, Tina and I wanted to bring the excitement of FIRST to the mountains of Western North Carolina, and expand opportunities for students interested in careers in engineering and technology,” he said.

“The scholarship will allow an entering FIRST alumnus to experience the same excitement we have had in our careers as engineers and educators,” Jeff Ray said. “It was a natural fit to endow a scholarship for students who had participated in FIRST Robotics competitions to further their studies and to promote our passion for the engineering and technology profession to prospective students in the Kimmel School.”

The initial Hopkins and Ray FIRST Robotics Endowed Scholarship is expected to be awarded for the fall 2015 semester.

The WCU Board of Trustees in September approved a new minimum threshold of $25,000 for the creation of endowed funds.