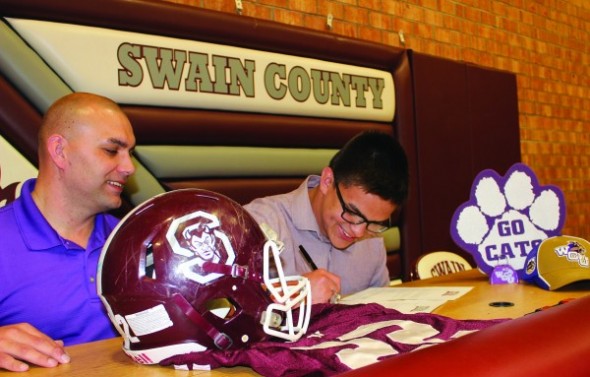 Spencer McCoy, an EBCI tribal member who is a senior at Swain County High School, has agreed to play college football at Western Carolina University.   A special signing ceremony was held in the Swain gym on Monday, April 6 for McCoy who was surrounded by family, coaches, and teammates.

“I’m excited for the future,” said McCoy. “I’m really blessed to be able to continue my career at the next level and I’m excited to be a Cat.   I couldn’t have done anything without Jesus Christ and all he’s done for me. I want to thank my family, fans, and everybody who supported me the whole way. “

McCoy plans to major in psychology with a minor in education while at WCU.  On the gridiron, he is slated to play defense and lineup as an inside linebacker.

“Spencer is a great football player, he’s a better kid, but he’s a great football player,” said Swain Head Football Coach Neil Blankenship.  “He’s worked real hard to get in this position.   He’s put a lot of extra time in at the weight room, in book studies, and on the practice field.  He’s an elite type caliber kid and I’m excited his hard work has paid off.”

McCoy is the only four-time All-Conference player in Smoky Mountain Conference football history.  He finished his illustrious career with 2,823 yards on 460 carries and 45 touchdowns.  On defense, he finished with 415 tackles, 8 forced fumbles (6 recoveries), 3 interceptions, and 2 blocked punts.  He finished the 2014 campaign with 90 tackles despite missing the final two games with a knee injury.

“We are extremely proud of Spencer,” said Spencer’s father, Scooter McCoy.  “Being a Western Carolina (University) alumnus, of course I’m very excited that he’s going to continue the tradition in Cullowhee.”

“It’s bitter sweet.  I’m very excited and very proud but at the same time, you understand you’re letting go a little bit.  He’s starting to spread his wings and take off into his college career.  It’s always tough.  You remember him when he was 5 or 6 years old running around the house, and to see how fast that time has went by, it’s truly amazing.  I cannot be any more proud than I am and I’m just super excited to see what holds down the road for him.” 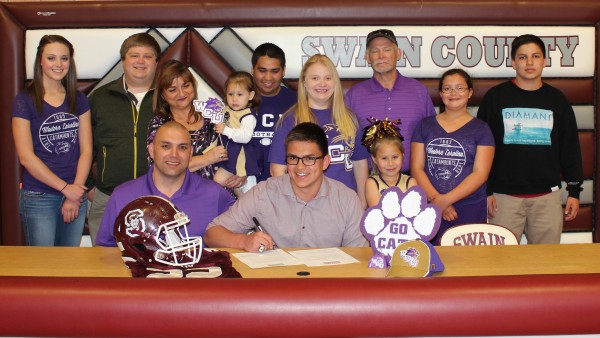 McCoy (seated center) is shown with members of his family.