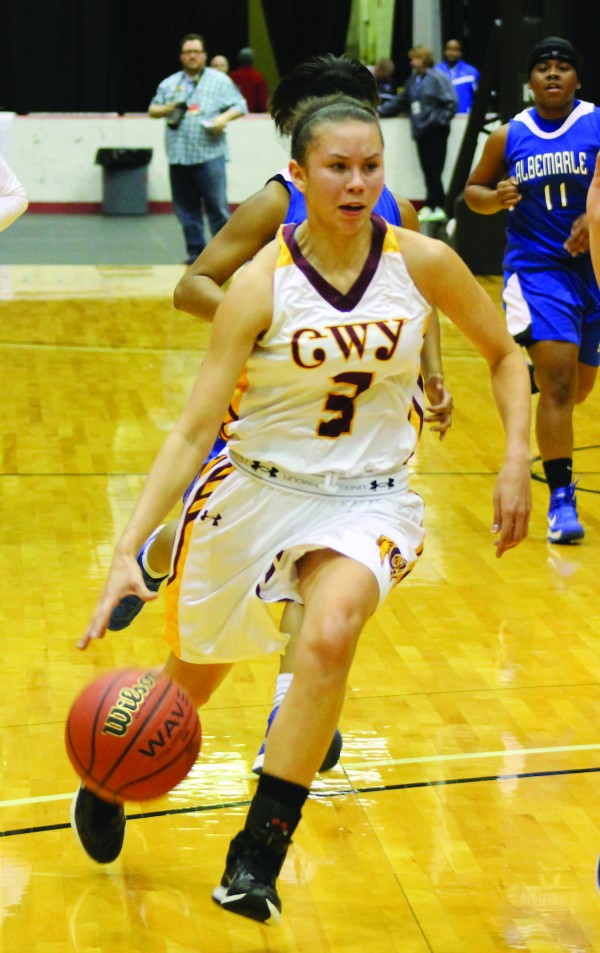 Kendall Toineeta (#3), shown in the 1A West Regional semi-finals, has been named Player of the Year in the Citizen-Times All-WNC selections. (SCOTT MCKIE B.P./One Feather)

Kendall Toineeta, Lady Braves senior point guard, has been named the Player of the Year in the Citizen-Times All-WNC selections.  Toineeta, who led the Lady Braves to their fifth straight Sectional title and a spot in the 1A West Regional final, averaged 22.7 points/game and 6.9 steals this past season.  She was named All-Conference as well as the N.C. Basketball Coaches Association District Player of the Year.  This season, Toineeta broke the Lady Braves all-time scoring record and ended her career at Cherokee with 2,156 points.

Dustin Johnson, Braves senior point guard, was named to the All-WNC second team.  He averaged 22.3 points/game and was named the MVP in the Blue-White All-Star game.  Four of his teammates received Honorable Mention nods on the list including:  Eli Littlejohn, Jason McMillan, Brandt Sutton and J.J. Benjamin.

Spencer McCoy, Swain County senior and EBCI tribal member, was named to the All-WNC team for wrestling in the 220lb division.  McCoy won his third straight 1A state title this season.  He finished his high school career at 119-12 and never lost to a Smoky Mountain Conference opponent.