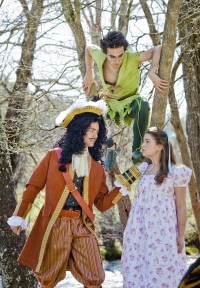 Peter Pan (played by Michael Gallagher) looks down from the trees as Captain Hook (Phillip Culton) makes a point to Wendy (Claire Vanderlinden) in a scene from Western Carolina University’s upcoming production of “Peter Pan: The Boy Who Would Not Grow Up.” (WCU photo)

CULLOWHEE – The Western Carolina University School of Stage and Screen will close its 2014-15 Mainstage season with a high-flying production of the J.M Barrie classic “Peter Pan: The Boy Who Would Not Grow Up.”

Directed by Brenda Lilly, assistant professor of acting, directing and screenwriting, the show will be staged at 7:30 p.m. Thursday, April 16, through Saturday, April 18, plus a 3 p.m. matinee Sunday, April 19, at the John W. Bardo Fine and Performing Arts Center on the campus of WCU.

The production follows the adventures of Peter, Wendy, Michael and John in Neverland. This new adaptation of the classic play that will be performed at WCU is based on the work of John Caird and Trevor Nunn, who researched and restored Barrie’s original intentions. The London Times considers the play “a national masterpiece.”

The production of “Peter Pan” will feature special flying effects provided by Hall Associates Flying Effects, an Illinois-based company that will visit campus for three days to hang rigging and train actors and crew, Lilly said.

“It is rare that you see the role of ‘Peter Pan’ played by a male actor, but it was always Barrie’s intentions when he wrote the play,” she said. “I am thrilled to honor that intention by casting Michael Gallagher as Peter. I am also delighted that we have a supremely athletic cast at our disposal, which I think will make the flying sequences that much more exciting.”

Susan Brown-Strauss, professor of costume design, is creating more than 50 costumes that will be worn in the show, including an original design for Nana the dog, Lilly said. The show also will feature eight sets designed by visiting assistant professor Andrew Mannion with a backdrop borrowed from Seattle Opera and designed by Tony Award-nominated set designer and Asheville native Thomas Lynch.

The cast of “Peter Pan: The Boy Who Would Not Grow Up” consists 37 students ranging from freshmen to seniors. In addition to Gallagher as the title character, the cast includes Claire Vanderlinden as Wendy, Lizzie Reynolds as Michael, Hunter Taylor as John, Phillip Culton as Captain Hook and Cory Phelps as Smee

For tickets, call the Bardo Arts Center box office at 828-227-2479 or go online to bardoartscenter.wcu.edu.