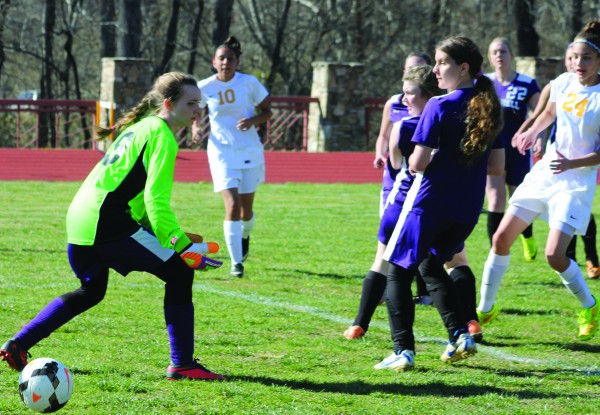 Following a kick by Cherokee’s Alyssa Land (#24), the ball goes between several Mitchell defenders and their goalkeeper for a goal in the first half of a home game on Wednesday, April 1. (SCOTT MCKIE B.P./One Feather)

After taking an early lead, the Cherokee Lady Braves were edged 2-1 at home on Wednesday, April 1 by Mitchell.

Coach Ledford said the Lady Braves finished the game strong.  “The last ten minutes, they played with incredible heart – something they’re famous for now.  There’s not a game that they don’t hustle and play with heart.  They’re unbelievable athletes and unbelievable people.”

The Lady Braves started out strongly and moved the ball up and down the field well in the first few minutes.  That movement paid off as Alyssa Land worked the ball through the middle of the Mitchell defense and drilled a shot, from about 15 yards out, that went between several defenders into the back of the net for the first goal of the match just 4:56 into the first half.

Cherokee had an opportunity seven minutes later as a Mitchell defender picked the ball up with her hands in the box resulting in a penalty kick.  Sidnie Yanez took the shot for the Lady Braves, and she drilled it right down the middle.  Usually, a goalkeeper will dive one way or the other on a penalty kick, but Caeley Mayo, Mitchell’s keeper, decided to stay put and just fell on the ball as it came in.

Nine minutes later, Mitchell would tie the game as Whitney Ledford slid one by the goalie to make it 1-1 with 20 minutes left before the half.  She would add another goal six minutes later to give Mitchell a 2-1 lead at the half.

Both teams came out for the second half and played tight defense.  Thirteen minutes in though, Whitney Ledford planted one into the back of the net following a deflected shot.  But, it was not to be as the offsides flag was up.

Cherokee had two chances later in the match on two direct kick opportunities (14:46, 10:34), but both balls sailed right to the Mitchell keeper.

Coach Ledford said his team is improving, and he’s looking forward to the upcoming games.  “We’re just going to keep after it.  We’ve got some bigger conference games coming up, and we’re using these as tune-ups.  We’ve got to be able to finish games.  They’re a good group of athletes, and I’m very proud of them.”

To view or purchase photos from this match, visit: https://onefeather.smugmug.com/SPORTS/SOCCER/Lady-Braves-2015/Vs-Mitchell-April-1/