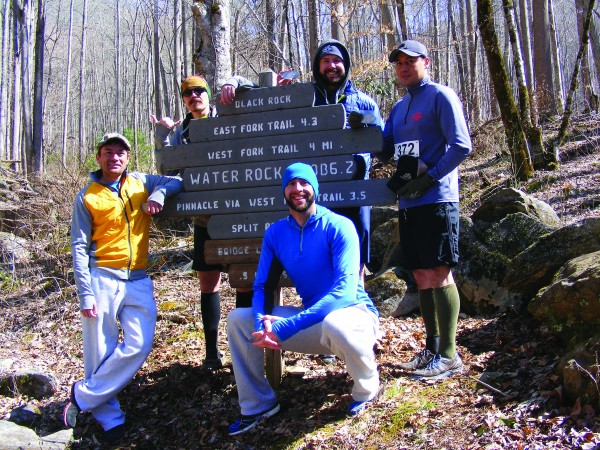 Members of the Cherokee Runners Club posted impressive finishes in the Fifth Annual Assault on Blackrock Run, Walk, Crawl on Saturday, March 28.  The event hosted 82 runners from western North Carolina and beyond.  Proceeds from the race went to benefit the non-profit organization Community Table in Sylva.  More than $2,000 was raised for this organization.

The run itself is on a grueling, rugged trail that ascends from Pinnacle Park, elevation 3,040 feet, to Blackrock Mountain, elevation 5,810 feet.  The 101 Challenge is to finish the seven-mile run in 101 minutes.  Adding to the difficulty of the run, the temperature on Saturday was 27 degrees at the beginning of the race and the top of the trail was covered in snow, ice, and mud.

Seth Holling came in with a time of 1:45:00 missing the cut off by a slim four minutes.  The winning time by Eli White, from Cullowhee, was 1:14:06.  The award for beating the challenge was a coveted belt buckle.

Jimmy Oocumma, president of the Cherokee Runners Club, commented, “This is the toughest race we run due to the dramatic elevation climb and the terrain.  You have to have some really good running technical skills to avoid the rocks, and this time the snow.  It is a lifetime accomplishment to finish and place in the race, but it is not just for fun. Our participation benefits the non-profit organizations that raise funds for the homeless and people who are in need of food”.