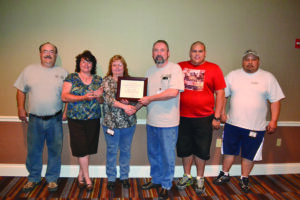 The Eastern Band of Cherokee Indians took first place followed by a tie for second place between the Mashantucket Pequot Tribal Nation and the Mashpee Wampanoag Tribe of Gay Head.  Third place went to the St. Regis Mohawk Tribe.

The water samples were tested and inspected by a panel of seven judges for clarity, odor, and taste. USET technical assistance specialist Scott Williams assisted with the coordination of the contest, which is sponsored by the USET Certification Board. The USET Certification Board is a seven member board comprised of Tribal leaders, water system operators, and environmental experts. Williams says this contest does more than exhibit good drinking water submitted from Tribes.

“All of the water samples appeared to be good drinking water,” said Williams.  “I believe the bigger message to the Tribes is that water quality from our USET Tribes is really improving and competition in this contest is increasing as Tribal water systems improve and operators are gaining more training. As for the Eastern Band of Cherokee, the first place recipient, this was the first year they competed.” Williams stated.

There were 11 Tribes submitting water samples to be judged.