Over 150 people came out on the morning of Thursday, April 25 to support the 2nd Annual Aubrey Littlejohn Walk Against Child Abuse through downtown Cherokee. (SCOTT MCKIE B.P./One Feather photos)

Aubrey Kina-Marie Littlejohn, a 15-month-old EBCI member, was pronounced dead at Cherokee Indian Hospital on the morning of Jan. 10, 2011.  She died while under the care of her aunt, Ladybird Powell, who pleaded guilty in February to involuntary manslaughter, two felony counts of child abuse and several other charges in her death. 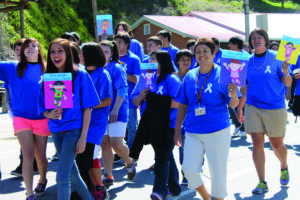 Students and faculty from Cherokee Middle School came out to support the walk.

Over 150 people came out on the morning of Thursday, April 25 to support the 2nd Annual  Aubrey Littlejohn Walk Against Child Abuse through downtown Cherokee.  The walk was sponsored by the Heart to Heart Child Advocacy Center in Cherokee, along with members of Littlejohn’s family, and was held in conjunction with Child Abuse Prevention Month (April).

“We are glad everybody came out,” said Jasmine Littlejohn, Aubrey’s mother.  “It’s a good thing.  We don’t need another death like that again in our community.” 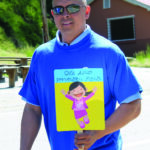 The Eastern Band of Cherokee Indians is currently working to develop its own Department of Social Services in the wake of Aubrey’s death.  Several Swain County DSS employees who handled the case originally have been indicted on various charges linked to a cover-up.  Candace Lassiter, a former Swain DSS supervisor, pleaded guilty recently to three counts of forgery involving fake documentations in the case.

“I don’t think the other county DSS’s care about the reservation kids,” said Jasmine Littlejohn.  “They don’t put as much effort into it as they would with other kids.”

Becky Walker, a social worker with the BIA Cherokee Agency Department of Social Services, spoke on behalf of the Littlejohn family at Thursday’s event.  This (child abuse) is an issue in our community, and our community is going to be the one to make a difference.  It takes everybody in our community to protect the children.” 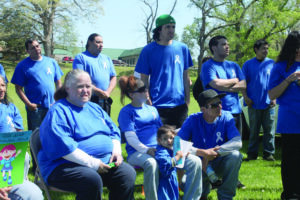 Members of the Littlejohn family, including Aubrey’s mother, Jasmine Littlejohn (seated right), are shown at the conclusion of Thursday’s walk.

She spoke briefly about Aubrey’s case and told the crowd that it is important to focus on making positive changes to protect the children in the Cherokee community.  “Just remember, even when you’re not in this month, protecting the children is really important. So, if you’re an adult in the state of North Carolina, you’re a required reporter.  If you suspect abuse or neglect, then it is your responsibility to call the Department of Social Services and make a report.”

Walker went on to say, “The Tribe is working to create its own Department of Social Services, and we’re working on that effort.  We just want to make everyone aware so that Aubrey Littlejohn’s life was not in vain.  She was only here for a short time, but her life had purpose and it had meaning.  We can live that purpose and meaning by doing our part.”

Principal Chief Michell Hicks was at Thursday’s walk and commented, “It’s a really beautiful day to be here.  We have a really great turn-out for this annual event.  It’s just a reminder to us that we all have responsibilities as parents and as a Tribe.  That’s the most important thing is for us to continue to remind ourselves that there are issues out there, and there are some major issues that we need to continue to deal with.”

Amy Walker, an EBCI tribal elder from the Yellowhill Community, spoke at the end of the walk, “Today, we’ve moved a long way from who our ancestors were, and I have found that trying to learn more about my own culture and live it has boosted my morale and my ability to be more proud of who I am as a Cherokee and a Lakota woman.  Today, this is a remembrance of who we really are.”