CULLOWHEE – The significant role that Western North Carolina’s institutions of higher education play in making the region an attractive place for business and industry was a common thread of conversation at a round table discussion about the health of the WNC economy held Wednesday, April 17, at Western Carolina University.

The WCU College of Business sponsored a panel of business, education and economic development officials from WNC for a discussion of the region’s business and economic opportunities, moderated by Business North Carolina magazine. 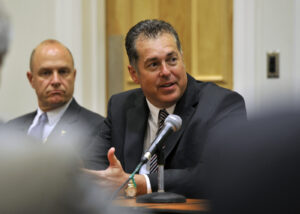 WCU Chancellor David O. Belcher said that higher education has a dual role to play in the education of the region’s workforce by training individuals for specific jobs and by equipping them with the critical-thinking and communication skills that are necessary in the rapidly changing economy of the 21st century.

“One of the philosophies we take at Western Carolina is to stay very much in touch with the businesses and industries of Western North Carolina in order to see what their needs are, and those needs change and evolve,” Belcher said, stressing WCU’s role in educating many of the region’s nursing and health career professionals, teachers and educators, engineers, and employees of hospitality, tourism, banking, finance and other industries.

Scott Hamilton, president and CEO of AdvantageWest Economic Development Group, agreed. “We don’t want to train a generation how to build an iPhone. We want to train a generation to have the innovation and ability to take a bag phone and create an iPhone, and then create an iPad, and then create whatever comes next,” Hamilton said. “We have to have a workforce that can see what the next product is going to be, and then be able to create that new product.”

Representatives from businesses including Sierra Nevada Brewing Co., Moog Music Inc. and Harrah’s Cherokee Casino Resort agreed that having an educated workforce of graduates of public universities, private colleges and community colleges is a key ingredient in the region’s economic development strategies.

“Our employees have to have an education and have good communication skills,” said Stan Cooper, co-manager of Sierra Nevada Brewing Co.’s Mills River brewery, scheduled to open later this year. “A big plus in this area is the educational institutions that are here. That was one of the criteria we were looking at for where we were going to go.”

Moog Music was attracted to Asheville and Western North Carolina in large part because the region’s spirit of entrepreneurship and creativity mirrors that of the company’s namesake, the developer of the Moog synthesizer who was inducted into the National Inventors Hall of Fame, said Emmy Parker, senior marketing and brand manager for Moog Music.

Higher education helps equip creative people and small-business with the skills they need to be successful, said Darrell Parker, dean of the WCU College of Business. “We are educating the creative class, the entrepreneurs who will be creating the jobs that come in the future,” Parker said. “That’s why we are shifting from a traditional common curriculum to make sure our curriculum is focused on entrepreneurship, innovation and impact.”

W. James Johnson, of Asheville-based The Van Winkle Law Firm, said the region’s culture of self-reliance and hard work meshes well with the creative class and the entrepreneurial spirit. “We have a tradition in the mountains of resourcefulness, ingenuity, a can-do attitude and elbow grease,” Johnson said. “That’s what it takes today when starting a new business.”

Brooks Robinson, senior vice president and general manager of Harrah’s Cherokee Casino Resort, said his company’s employees are able to pursue valuable professional development opportunities through partnerships with WCU and area community colleges, while David Wiggins, managing partner for the Asheville office of the Dixon Hughes Goodman accounting firm, spoke about the diverse array of educational opportunities that exist in the region.

Belcher said the round table discussion about regional economic development is at the heart of WCU and its mission. “Western Carolina University is a public university, and we are charged with serving the needs of the people of Western North Carolina.  Right at the heart of the matter is economic and community development, through ensuring the vitality of the region and through ensuring the vitality of the people who live in this region.”

Edited excerpts of the conversation will be published in the June 2013 issue of Business North Carolina. The discussion was moderated by Peter Anderson, special projects editor.