The New Kituwah Academy observed its ninth anniversary on Friday, April 19 with a program called “Celebrating 9 Years Speaking the Language” for students, faculty, parents and community members.  The program consisted of a series of speakers from various programs followed by a presentation in the Cherokee language by the children.

In his opening remarks, Curriculum & Instruction coordinator Garfield Long, stated, “We have a responsibility to our children of today, to the elders that are still with us and especially to those that have moved on. We need to honor all the past generations of Cherokee speakers by continuing strengthening our language so it will live beyond the next generation and thus our children will not be denied and be given the privilege of speaking the language and having our own identities that come with it.” 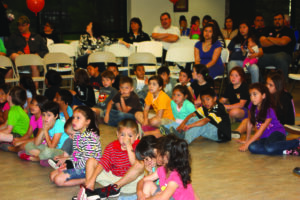 Kathi Littlejohn, Kituwah Academy board member, commented, “Lots of programs start and then they stop. Lots of relationships start and stop. So what makes Kituwah Academy successful? Because this program is built on love, hard work, dedication and need. The Board of Trustees are honored to be a part of it and will do anything we can to help continue its success  Hali ha sti, Kituwah Academy.”

“I was asked to speak as a member of council,” said Big Cove Rep. Bo Taylor, “but I come here today as a parent first and foremost.  I have made it a priority that my children learn Cherokee as a part of their education.  In many parts of Indian country native languages are dying but all I have to do is to look in the eyes of these children, and know that our language is very much alive.”

Rep. Taylor continued, “I want to commend the teachers and staff for sharing their knowledge of the Cherokee language.  But I want to thank them for loving our children.  New Kituwah is not just a school but we are a family.”

During the anniversary celebration, KPEP manager Renissa McLaughlin, assisted by School Administrator Kylie Shuler, honored four individuals for their contributions to the academy.  Each was presented with a certificate for their achievements.

“Just a few years ago, we thought that our beautiful Cherokee language was dying,” said Myrtle Johnson, Speakers’ Consortium representative and EBCI Beloved Woman.  “The total Immersion Program proves that it is very much alive and people of all ages are taking Cherokee languages classes and learning to speak.”.

During Friday’s celebration, New Kituwah Academy students sang a song in the Cherokee language. The Drama Club presented a play also in Cherokee.  Due to an early prediction for rain today, Music Teacher Sarah Snyder had the play prerecorded and showed it on screen for the audience.

At the luncheon after the presentation, Albert Crowe, Deputy of Community Education & Recreation Services, concluded, “It just gets better every year.”