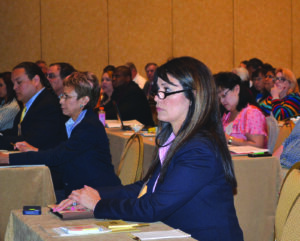 “I am very glad as this is a great opportunity for our Tribe and USET region,” said Peone.  “I believe that I am able to assist NAFOA with a new perspective that may be unique to other board members.  I truly appreciate the confidence from my peers in Indian Country and from the Tribe (EBCI) to give me this opportunity to serve as Treasurer.”

As CFO for the EBCI, Peone is responsible for a budget in excess of $300M and serves as the Chairman of the Tribe’s Investment Committee, whose trust funds are in excess of $600M. During recent years, she has spent much of her time adopting new processes to improve the efficiencies of the Tribal government by changing accounting practices and processes. She also works with her staff to collaborate and support programs in an effort to provide better services, decreasing waste and explore ways to increase efficiencies.

Peone also works to promote the Tribe’s marketing and promotions which bolsters the tourism economy of the region. Her accomplishments have set in motion change for the Eastern Band of Cherokee, and her hope is continue in this momentum to better serve the membership of Eastern Band of Cherokee in positive and effective manner while maintaining fiscal accountability and prosperity.

Peone grew up in Cherokee, then moved to the Pacific Northwest twenty-five years ago where she served several tribes and tribal organizations. She worked for the Spokane Tribe of Indians in the early 1990’s as Administrative Director and later as General Manager for one of the tribal enterprises. She also worked for the Kalispel Tribe of Indians as a Business Manager for the Camas Institute. At the Camas Institute, she initiated program and organizational development while supporting the organization financially.