THE ROAD IS OPEN!

Newfound Gap Road (US 441) through the Great Smoky Mountains National Park, closed due to a landslide in January, officially opened at a media event on Monday, April 15. (SCOTT MCKIE B.P./One Feather photos)

Newfound Gap Road (US 441) through the Great Smoky Mountains National Park (GSMNP) is now officially open.  The road, closed by a landslide that occurred in January, was opened on the morning of Monday, April 15 – just 90 days after 90,000 cubic yards of dirt and rock slid off the hill during the slide. 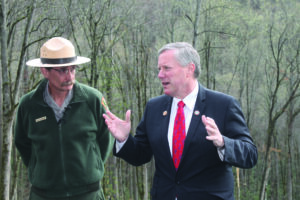 “Newfound Gap Road is the primary artery of this National Park,” said GSMNP superintendent Dale Ditmanson at a media event announcing the Park’s opening on Monday.

“People do make decisions about where to travel when they hear a road is closed,” he said. “So, we do know how important this is to our local economy.”

Ditmanson said the Park means over $800 million annually to the local economy and accounts for 12,000 jobs.

He spoke highly of the partnerships that helped the road to be completed early and so quickly.  The original deadline for completion was May 15, and the Park partnered with the Eastern Band of Cherokee Indians to offer an incentive for early completion to the tune of $18,000 a day for each day the project was completed early up to a total of $500,000. 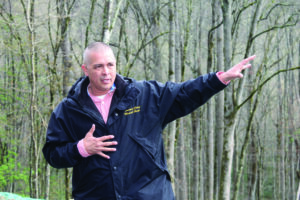 Phillips & Jordan was awarded the $3.9 million contract in February by the Federal Highways Administration to rebuild the road. By completing the job by April 15, Phillips & Jordan will receive the full incentive payment of $500,000.

APAC – Atlantic, Harrison Division was awarded the initial contract for site preparation and clean-up, and they completed their work on February 22.

Newfound Gap Road is the main connector from Gatlinburg, Tenn. and Cherokee.  Road closures, of any kind, have a significant impact on the Cherokee economy, and Eastern Band of Cherokee Indians officials related they are very happy to have the road opened so quickly.

Principal Chief Michell Hicks praised the work of the National Park Service and Phillips & Jordan.  On the incentive offered by the Park and the Tribe, Chief Hicks stated, “We had to do it guys.  Our estimates were that this was going to affect Cherokee by at least a million dollars.  I can’t even imagine Bryson City, Sylva and the other guys; it’s a significant affect.” 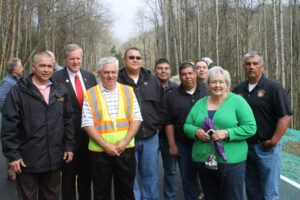 He thanked Tribal Council for approving the incentive.  “They really stepped up.  It was something that we felt we had to do.”

“Thanks everyone for all of your assistance.  It’s a big project.”

Congressman Mark Meadows (R-NC) was present at Monday’s event and also praised the partnerships that went into the project.  “I never thought that I would like April 15 as a date, but this year April 15 is a good day because we’re opening this road up.  Less than 90 days ago, a good number of us stood just to my right where we saw this unbelievable hole in the ground, and so the original estimates were much greater in getting this road open.”

“We put politics and party aside, and it really is a great model of a federal highway group working very closely with our Superintendent, who has been very responsive on a regular basis, working with the Tribal Council, Principal Chief Hicks, and working with local government,” Rep. Meadows said.  “So, when we see all of those come together, it’s just a great day.”

Tribal Council Chairman Jim Owle commented that having the road open will help the local businesses.  “I think it helps the economy.  In looking at this road, we have people coming over from Gatlinburg and Tennessee to do a one-day trip and some come over and stay more than one day.”

“It helps our local business, and that’s what we strive to keep open,” he said.  “I’m just glad it’s done.  I’m glad it’s done early, and I’m glad to see that the Eastern Band could be a part of it.”

Jason Lambert, EBCI Commerce Division director, stated, “We are certainly pleased that the project is done a month ahead of time.  Early on, several months ago, we really emphasized the adverse impact on our local businesses anytime the mountain is closed for a prolonged period.  So, we are pleased to see that is finished ahead of schedule.”

He said that the incentive dollars offered by the Tribe seemed to help get the road completed faster.  “The timing couldn’t be better.  We are here in the second week of April, and hopefully we’ll have a good tourist season ahead of us.”

Big Cove Rep. Bo Taylor commented, “I sit on the CHA (Cherokee Historical Association Board, and we’re getting ready to get into our season, and we need to have people in town.  All you have to do is drive through town to see that when this road was closed, town was dead.”

Rep. Taylor said it is more than just the casino being affected.  “We also have a lot of small businesses in town that need this road.  For many years, tourism has been our live blood, and this is a main artery.”

Cherokee County – Snowbird Rep. Adam Wachacha added, “I really appreciate all of the hard work that has been put into this road, and we know the economic impact that this road has to both sides.  We enjoy east Tennessee as much as they enjoy western North Carolina.  Overall, I am just really appreciative to have this thing pushed through in a timely manner.”

The main work accomplished at the landslide site was the construction of a “reinforced fill” which is layers of crushed stone with a geosynthetic material layered every three to four feet.  Dana Soehn, Park spokesperson, related that around 40,000 cubic yards of crushed stone, obtained from the Nantahala Quarry, was used in the project.

Emmett Melton, Federal Highways Administration construction operations engineer, said that there is some minor reseeding work still left to done, but the project is “basically finished.”  He estimated that between 2,500 – 3,000 dump truck loads of stone were brought in for the project.