Melitia Saunooke Sneed, known as Lish, was well-known for being a successful business woman in the local area. She was a life-long resident of Cherokee.  Along with her businesses, she was an active member of the community with several organizations. 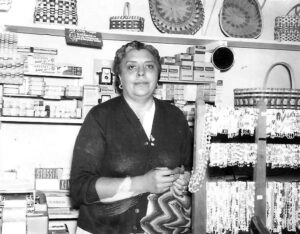 She and her husband, Mack Sneed, raised their daughter, Helen D. Sneed, living in the Qualla Community.

“She was a very giving person,” said Jenny May, care taker for Lish, “wanting to help other people and not letting anyone know.”  She and Mack were married for over 60 years.

She and Nettie Saunooke Crowe, her sister, did much of their business ventures together. They were inseparable.  In 1953, they began setting up their businesses geared toward tourism at Wonderland, now known as Saunooke’s Village.  They also leased some of their properties to others.

The TePee Craft Shop, ca. 1955, was one of Sneed’s businesses. (Photo courtesy of Amanda Bridgeman Lane)

“She was very proud of her businesses,” commented Jenny May.  May explained that if someone wanted a pair of moccasins or a basket, Lish would mail the item that day and comment proudly that others may have more than she did, but she was the better business person because she delivered the same day.

She was an active member of the Eastern Star, whose aim is to inspire heroic conduct and to spread the word of the Bible to the world.  She was also a poll worker for the Democratic Party at the Qualla Precinct in Jackson County.  She did volunteer work for the Red Cross/Heart Fund, collecting donations.  Lastly, she was an active member of the Cherokee United Methodist Church, well-known for her cakes.

Holt shared a humorous story about a tea set that belonged to Lish.  She told Lish that she wanted to have the set, and Lish told her that she could have it when she passed on.  Holt stated, “I didn’t know she was going to live to be 100.”

At the age of 95, Melitia “Lish” Sneed passed away.

“She was a wonderful person,” said Mary Herr, her friend.