NASHVILLE, Tenn. – Several federal agencies and offices are making a collective announcement on an initiative to improve access to safe drinking water and basic sanitation in Indian Country at the Tribal Utility Summit (TUS) in Nashville. A memorandum of understanding (MOU) with the U.S. Environmental Protection Agency (EPA), Department of Agriculture (USDA), Housing and Urban Development (HUD), Health and Human Services (HHS), Indian Health Service (IHS), and Department of Interior (DOI) to work collectively to reduce the number of Tribal Homes lacking access to safe drinking water and basic sanitation by the year 2015. The announcement of the MOU being finalized was made in a presentation by EPA Environmental Protection Specialist Matthew Richardson, Tuesday at the TUS, which is being hosted by United South and Eastern Tribes , Incorporated (USET), EPA, and IHS. Richardson made the announcement for all federal agencies represented. 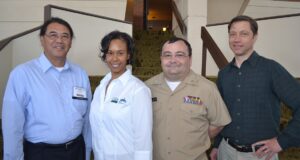 The new MOU was well received by attending Tribes at the 4th Annual TUS and by USET President Brian Patterson. After the announcing the MOU was finalized and being implemented, President Patterson stated, “I can think of nothing as sacred as the water, which is medicine to all of life. It will keep us all alive as a people. For us to recognize the safe and healthy communities for our people it is essential that they have access to clean, healthy, safe water. In fact the Eastern Band of Cherokee Indians and the Acquinah Wapanoag (Tribe of Gay Head) have both made asks for sustainable practices and best usage of water resources for their
future generations that will follow. So I would dare say that clean, healthy, safe drinking water is key and vital to the self determination of a people, for the sustainability of a people, and our future generations. We commend collaboration among the federal agencies as a tool and a resource for Indian Country and to care for the sacredness of clean, healthy, safe drinking water.”

The Fourth Annual Tribal Utility Summit (TUS) is underway in Nashville. TUS is a training and continuing educational program for operators and managers overseeing Tribal drinking water, waste water, solid waste utility and infrastructure, which is cooperatively supported by United South and Eastern Tribes, Incorporated (USET), U.S. Environmental Protection Agency (EPA), and the Nashville Area Office of Indian Health Service (IHS). The mission of improving and protecting a healthy and safe quality of life is the theme opening speakers reminded the attendees.

The MOU will remain in effect for the next eight years and builds upon the success of efforts to date. According to IHS Since 2007, substantial progress has been made to improve access; for instance, the number of American Indian and Alaska Native homes lacking safe drinking water has been reduced from 12 percent in 2007 to 7.5 percent in 2013.