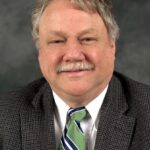 Mercer, a retired professor of political science and public affairs and founding director of WCU’s Public Policy Institute, served as the honor society’s international president from 2005 to 2011.

In that time, he helped the honor society cope with a financial crisis and turn around a declining number of chapters and initiates. He activated an aggressive program to solicit chapter-building cooperation from professors at colleges that did not have Pi Gamma Mu chapters. Mercer also created a new position, a chapter-development officer, at the honor society’s headquarters.

Under Mercer’s leadership, the organization posted its first annual operating surplus in years at the end of the 2009-10 fiscal year. Pi Gamma Mu now has enjoyed three consecutive fiscal years of year-end surpluses.

“Gordon Mercer’s leadership of Pi Gamma Mu reflects the same values that exemplified his career: focus on students, a willingness to take on difficult tasks and dedicated professionalism,” said Starnes.

The honor society originated at Southwestern College in Winfield, Kan., in 1924.  Western Carolina University’s chapter of Pi Gamma Mu was founded in 1983, and Mercer was the chapter’s sponsor from 1983 until 2011.