Thanks to a huge donation from Caesar’s Entertainment, Inc., a new MRI room will be open at Cherokee Indian Hospital early in 2013.  A groundbreaking was held at the site on Wednesday, Oct. 24 as well as a $2 million check presentation that will fund the machine in its entirety and the operation for five years.

“Rarely does a rural, small hospital have such a project and we owe it to the leadership of our Tribal Council and our Chief and also the executives at Harrah’s casino for negotiating and providing us with this wonderful gift,” said Carmaleta Monteith, Cherokee Indian Hospital Authority board.  “We will be able to provide very valuable services and shorten the period of time for consultation and analyses.”

Casey Cooper, Cherokee Indian Hospital CEO, related that he hopes to have a ribbon cutting sometime in February to officially open the new facility.

“In my opinion, as the CEO, this type of technology in a small, rural hospital of our size is really uncommon,” said Cooper.  “And, it clearly would not be possible without the partnership that we have with the Eastern Band and without the hard work of the casino staff and the casino employees.  We are extremely grateful to be a beneficiary of their hard work.”

He said the benefits of having a MRI machine on site are tremendous.  “It’s going to help us shorten that time when patients are stressed and they have anxiety because they haven’t received a diagnosis.” 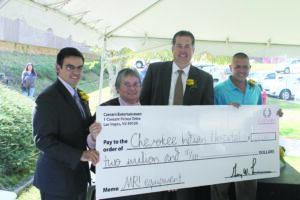 Brooks Robinson (2nd from right) presents a $2 million check to Casey Cooper, Carmaleta Monteith and Principal Chief Michell Hicks for the purchase of a MRI machine and its operational costs for five years at the Cherokee Indian Hospital.

Principal Chief Michell Hicks commented, “This Tribe is blessed and technology has brought us a long way.”

“The whole vision was to bring something that would be a benefit for our people.”

Chief Hicks told the crowd that earlier in the day he signed legislation that will provide for a new hospital to be built on a site adjacent to the current facility.  “We will provide better services than we ever have in the past and this new technology will help us do that.  We will continue to grow and we have to grow smart.  I want to thank the casino for all of the resources.  We couldn’t do it without you.”

Brooks Robinson, Harrah’s Cherokee senior vice president and general manager, commented, “This is a great opportunity for me to really thank the Eastern Band of Cherokee Indians for the partnership that we’ve had the last 15 years.”

He said that Caesar’s has a commitment to giving back and being a part of the communities they are involved in.  “To date, we’ve had over $4 million in donations to the surrounding communities.  We’ve added jobs.  About 60 percent of our upper management at the property are tribally-enrolled members.  That’s something that we’re very proud of.”

Robinson continued, “We’re proud to be a part of this.”

According to WebMD, MRI is defined as, “Magnetic resonance imaging (MRI) is a test that uses a magnetic field and pulses of radio wave energy to make pictures of organs and structures inside the body.  In many cases, MRI gives different information about structures in the body than can be seen with an x-ray, ultrasound, or computed tomography (CT) scan.”