By MAGGIE WEICHEL and HARMER WEICHEL

Kateri Tekakwitha (1656-1680) will be elevated to sainthood in a Canonization Mass on Sunday, Oct. 21.  She will become the first American Indian saint.  The joyous celebration will take place in Rome, Italy during a Mass in St. Peter’s Square in the Vatican.

Tekakwitha was born in upper New York State in 1656, the daughter of a Christian Algonquin mother and a non-Christian Mohawk chief.  When she was 4 years old, a smallpox epidemic swept through the Mohawk Valley and both her parents and brother died.  Tekakwitha survived, but she was left with poor eyesight, a badly scarred face, and physical weakness.  She was adopted by her uncle and his wife, and was an obedient child.

At the age of 20, she was baptized in Fonda, NY and given the name Catherine, or Kateri in the Mohawk language.  Because of the ridicule and hostility to which she was subjected upon becoming a Christian, Kateri fled to Caughnawaga, another Mohawk village near Montreal, Canada.  In this Christian settlement, she was able to practice her religion in more peaceful surroundings.

At the age of 23, Tekakwitha made a vow to never marry, even though such a commitment was unknown to the other Indians.  Her whole life was devoted to praying, working and helping others until she was struck with an illness that was to claim her life.

On April 17, 1680, Kateri died at the age of 24.  Her last words were, “Jesus, I love you.”  Shortly after her death, before the eyes of two priests and all the relatives and friends that could fit into the room, the ugly scars on her face suddenly disappeared.

Tekakwitha was declared venerable by Pope Pius XII in 1943 and in 1980 she was beatified by Pope John Paul II.  Prayers for her canonization intensified worldwide.  Tekakwitha conferences began to be held regularly in various states which were attended by missionaries, non-clergy and Native Americans.  Their main purpose was to work towards the canonization which required a miracle by Tekakwitha and to address social and spiritual issues. 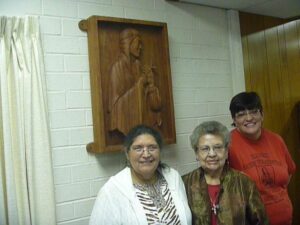 Parishioners of Our Lady of Guadalupe in Cherokee are making the trip to Italy to attend the Canonization of Kateri Tekakwitha including (left-right) Lawanda Meyers, Maxin Studer and her daughter Mary Jo. (Photo contributed)

Then in 2006, the prayed-for miracle happened.  A basketball game injury to a 6 year old boy in Washington State developed into a life threatening bacterial infection.  Doctors had given up hope for Jake’s recovery but family, friends and community continued to pray for his recovery.  A nun from the “Society of the Blessed Kateri” went to the hospital and placed a Kateri relic on the boy’s body.  Within hours, the infection stopped progressing and Jake rapidly recovered.  Doctors were unable to give a medical explanation.

Investigators from the Vatican researched the incident for three years, and Pope Benedict XVI of the Roman Catholic Church approved it as a miracle attributed to Kateri’s intervention.  This was the sign which the Church welcomed and needed to confer sainthood.

The congregation of Our Lady of Guadalupe on the Qualla Boundary had been following the Kateri events with prayers and symbolic expressions for many years.  In the 1980s, the church meeting hall was named with a plaque “Kateri Center”.  Displayed there is a beautiful wooden carving of Kateri created by Cherokee artist Virgil Ledford.  Also, a large deerskin painted in her likeness is hanging in the sanctuary.

President Obama announced on Thursday, Oct. 18 that he is sending a delegation to attend the Canonization Mass.  The Honorable Miguel Humberto Diaz, U.S. Ambassador to the Holy See, will lead the delegration which will include:  Sister Agnelle Ching, assistant general minister, Sisters of Saint Francis of the Neumann Communities and Sister Kateri Mitchell, Sister of Saint Ann (Mohawk Nation).

The Cherokee community is invited to a special Evening Prayer Service at OLD (Lambert Branch Road) on Sunday, Oct. 28 at 6pm in celebration of Kateri’s elevation to sainthood.

– One Feather staff contributed to this report.