Eagles and their feathers are sacred to just about every American Indian tribe and are used in various ceremonies and religious activities.  Members of federally-recognized tribes are allowed to legally possess and use feathers and parts from federally protected birds, and the Department of Justice issued a memorandum on Friday, Oct. 12 which “formalizes and memorializes” many policies regarding this issue. 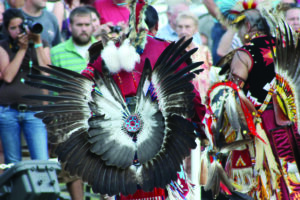 A dancer wears an eagle feather bustle during the 37th Annual EBCI Pow Wow in June. The Justice Department has formalized regulations regarding who can possess and use feathers and parts of eagles and other migratory birds. (SCOTT MCKIE B.P./One Feather)

“The United States has a strong interest in accommodating the interests of these tribes by protecting the ability of their members to meaningfully practice their religions and practice their cultures,” U.S. Attorney General Eric H. Holder Jr. wrote in the memo.  “At the same time, tribes and their members and the United States share an interest in – and a responsibility for – protecting this Nation’s scarce and precious wildlife resources.”

According to Holder’s memo, members of federally recognized tribes will not be prosecuted if engaged in the following:

– Traveling domestically with federally protected birds, bird feathers, or other bird parts or, if tribal members obtain and comply with necessary permits, traveling internationally with such items;

– Acquiring from the wild, without compensation of any kind, naturally molted or fallen feathers of federally protected birds, without molesting or disturbing such birds or their nests;

– Providing the feathers or other parts of federally protected birds to craftspersons who are members of federally recognized tribes to be fashioned into objects for eventual use in tribal religious or cultural activities.  Although no compensation may be provided and no charge made for such feathers or other bird parts, tribal craftspersons may be compensated for their labor in crafting such objects.

“Eagle feathers are of great spiritual and cultural significance to many tribal nations and their citizens, and we view the administration’s new policy as a positive step toward addressing the use and possession of these sacred items,” said Robert Holden, Deputy Director of NCAI.  “We are hopeful that this policy will protect the rights of all Native peoples to practice their religion without fear of interference by federal officials.”

“After decades of confusion, this new policy clarifies the position of the federal government in a manner that strikes a more equitable balance between the rights of Native American practitioners and the preservation of eagles.”

For more information on eagle feathers and how to obtain them legally, visit the U.S. Fish and Wildlife Service website www.fws.gov/le/national-eagle-repository.html.

For a list of birds protected by the Migratory Bird Protection Act, visit https://www.fws.gov/migratorybirds/RegulationsPolicies/mbta/mbtandx.html.