RALEIGH – Gov. Bev Perdue has appointed Greg Richardson, Executive Director of the N.C. Commission of Indian Affairs, to serve as North Carolina’s delegate to Governor’s Interstate Indian Council (GIIC). As such, he will represent her at the 63nd annual GIIC Conference to be held Oct. 21-22 in Sacramento, Calif. 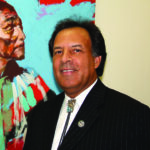 “It is a privilege to represent our state at this annual gathering, which will address topics of interest and concern to members of North Carolina’s tribes and urban associations,” said Richardson, who is marking his third term on the Council.

The GIIC Conference coincides with the National Congress of American Indians annual conference, which will be held in Oct. 21-26, also in Sacramento. The events will be followed with the national observance of November as Native American Heritage Month.

The 17th annual N.C. American Indian Heritage Month Celebration will be held at the N.C. Museum of History on Nov. 17. The free, family-friendly event features a wide range of culturally-related interactive displays and activities, as well as traditional foods.