Coyotes, once rarely seen in western North Carolina, have enjoyed increased populations in the last several decades.  Now, the Eastern Band of Cherokee Indians has taken steps to help control populations within its boundaries. 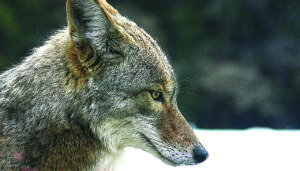 Coyote are on the rise in western North Carolina, and the EBCI has taken steps to control that rise in population. (Photo by Christopher Bruno)

“Coyotes are on the increase throughout the country and considered the hardiest animal in the country,” said Forrest G. Parker, EBCI Director of Natural Resources and Construction. “The most significant impact is loss of wildlife populations ranging from deer to small animals.  Many species of small mammals and birds have been significantly impacted by the rise in coyote populations.”

Tribal Council recently passed an amendment to Cherokee Code Chapter 113 Hunting and Fishing which implements a no closed hunting season and a small bounty for each coyote killed.  The amendment allows a bounty up to $25 for each coyote taken legally by an EBCI tribal member.  Animals are not allowed to be trapped, only shot.

Parker said the most common impact to people is the loss of pets and livestock.

According to the North Carolina Wildlife Resource Commission, coyotes were first spotted in North Carolina in 1938 in Gaston County.  “The first confirmed coyotes that were collected came from Johnson County (1955) and Wake County (1970).  Until the late 1980s, coyotes seen in North Carolina were likely due to illegal importation and release.  By 1990, coyotes began to appear in western North Carolina as a result of natural range expansion from Tennessee, Georgia, and South Carolina.”

The Commission reports that coyotes are now located in all 100 of North Carolina’s counties.

Parker related, “The reason for the increase is primarily due to high survival rates of coyote young, the lack of predators, and the difficulty to successfully hunt/trap them in forested areas.  Their diet is too diverse and non-specific, they can adapt to any situation.”

He said exact population counts would be too costly to assess for most agencies.  “Everyone agrees they are on a significant rise.”