UNCASVILLE, Conn. – Domestic Violence and sexual assault is a priority topic for United South and Eastern Tribes (USET) leaders. Among the many issues that Indian Country wants to address, the reauthorization of the Violence Against Women Act (VAWA) is getting a lot of attention from USET leadership. USET has been involved with two events this past summer regarding the VAWA Reauthorization. 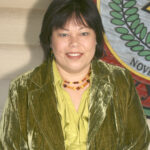 There are two bills that have been proposed to address reauthorization for VAWA – H.R. 4970 and S.1925. American Indian advocates support S.1925 as it would restore Tribal criminal jurisdiction over both Indians and non-Indians for a narrow set of crimes that occur all too frequently in Indian Country—domestic violence, dating violence, and violations of protection orders. S. 1925 would also clarify Tribal civil authority to issue and enforce protection orders under current law and would address the jurisdictional gap in Indian Country.

Painttown Rep. Terri Henry presented to the USET board on Friday, Oct. 12 and urged USET to call for Congress and the U.S. Department of Justice to create a new grant program with a Tribal set-aside to develop and maintain emergency services on Tribal lands for Native women seeking safety from domestic and sexual violence.

“Many of you know that stopping domestic violence and sexual assault is near and dear to my heart,” she said.  “And, it’s an issue that I have been working on for the past 16 years. Most of my work has been at the national level working with Tribes across the United States to reform federal law that keeps us – our Tribal government – from keeping our People safe,”

In the current economy, securing federal funding for any new program is a difficult task, but given the urgency of the situation, creation of such services cannot wait. Since 2003, the NCAI Task Force has recommended that Congress create a Tribal set-aside within the Crime Victims Fund (“the Fund”) to develop and maintain services for Indian women victimized by domestic and sexual violence. The total amount of deposits into the Crime Victims Fund for FY 2012 was a record amount, $2,795,547,045. The next closest year was 2010 when $2.3 billion was deposited. The Fund currently has a reserve balance of approximately $8 billion.

Rep. Henry is the Co-Chair of the National Congress of American Indians’ Task Force on Violence Against Native Women, Board Chair of the National Indigenous Women’s Center, Principal Director of Clan Star, Inc., Board Member of the Indian Law Resource Center, and has a Juris Doctorate degree from the University of Iowa College of Law in 1993.