Elk are in rut in Park

Elk are beautiful animals.  They are majestic.  They are regal.  They are rare in this part of the country.  But, they can also be dangerous. 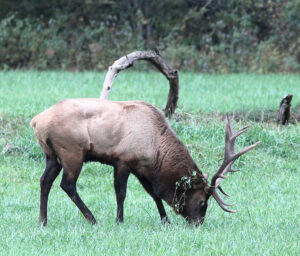 Elk, like this large bull spotted with a harem near the Oconaluftee Visitors Center on Thursday, Oct. 11, are in rut in the Great Smoky Mountains National Park. (SCOTT MCKIE B.P.One Feather)

Elk are currently in rut in the Great Smoky Mountains National Park and Park officials warn visitors that getting too close to the elk is not only dangerous, it’s also illegal.

“Willfully approaching within 50 yards (150 feet), or any distance that disturbs or displaces the elk, is illegal in the park,” state information from the Park.  “Violation of this federal regulation can result in fines and arrest.  Do not enter fields to view elk – remain by the roadside and use binoculars, telephoto lens, or a spotting scope to view the animals.”

Rutting season is the time when large elk bulls begin to gather their harems of cows for mating.  Bulls will bugle and display their fully-grown antlers to signal their prowess.

According to the Rocky Mountain Elk Foundation, “When the cows come into estrus (“heat”), the mating begins.  A bull elk must be ready – a cow is receptive for mating less than 24 hours.  She won’t be willing to mate again until her second estrus cycle arrives in 20 days.  Cows can have up to four estrus cycles each season, but most cows become pregnant during the first or second cycle.”

This process of bugling and rutting can be observed in the afternoon, almost daily this time of year, near the Homestead at the Oconaluftee Visitors Center and throughout the Cataloochee Valley.

Elk were re-introduced to the Park in 2001.  According to a Park report in July, “The current elk population in western North Carolina is believed to be approximately 140 animals, counting those elk both inside and outside of national park boundaries.”

A total of 14 calves have been born so far this year with 13 surviving.

These population numbers are impressive when one realizes that pre-reintroduction, the last elk in North Carolina was killed in the late 1700s.

For more photos of the elk from Thursday, visit the One Feather photo gallery at: