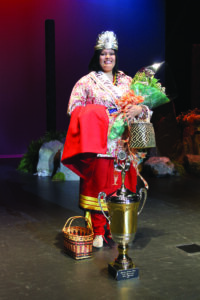 She is the daughter of Melissa Arch and Quinton Frankiewicz, and she resides in the Birdtown Community.  Frankiewicz graduated from Cherokee High School in 2010 and is currently a sophomore at Southwestern Community College with a double major in Fine Arts and Early Childhood Education.

Frankiewicz competed against Kelly Driver, of the Big Cove Community, during Saturday night’s pageant.  Driver is the daughter of Frank and Diane Driver.  She graduated from Cherokee High School in 2006 and earned her bachelor’s degree in English from Western Carolina University in 2011.  Driver is currently a Cherokee Language teacher at Cherokee Middle School.

For their talent, Frankiewicz sang “Amazing Grace” in the Cherokee language and English and Driver performed the Cherokee Buffalo Dance.

During the public speaking portion, Frankiewicz spoke on the revitalization of the Cherokee language and Driver spoke on the importance of obtaining a college education.

Eddie Swimmer served as the emcee for the event.