During the 7th annual Cherokee Day of Caring on May 19, approximately 240 community volunteers helped neighbors selected by their communities for assistance and pitched in to help with painting, yard clean-up, gardening, and fix-it projects.

The volunteers received significant support from the EBCI Facilities Department and the EBCI Housing and Community Development Division, which helped assess needs, compiled lists of the materials needed and supplied project leaders. 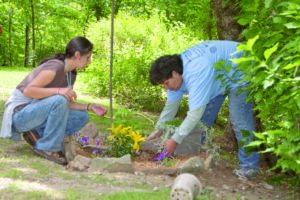 The annual Cherokee Day of Caring is sponsored by Cherokee Preservation Foundation, the Office of the Principal Chief of the Eastern Band of Cherokee Indians, and Harrah’s Cherokee Casino & Hotel.  The event began in 2005 and builds on the gadugi tradition of community service of the Cherokee people.