They played sports with each other as Lady Braves and now they get to share the top two slots in the Cherokee High School Class of 2011.  Rayna Davis has been named the valedictorian and Kayla Smith has been named salutatorian.   The two will give their speeches during the CHS graduation planned for Friday, May 26 at 7pm at Ray Kinsland Stadium. 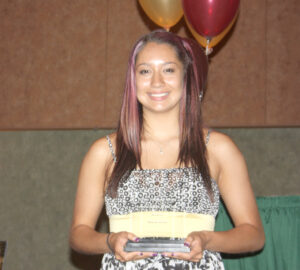 Rayna Davis has been named the valedictorian for the CHS Class of 2011. (SCOTT MCKIE B.P./One Feather photos)

“It is a true honor to be named valedictorian of our senior class of 2011,” said Davis.  “I’ve had some wonderful teachers and coaches at CHS who pushed me to accomplish this goal and never once let me believe that I couldn’t do whatever I set my mind to.”

At the recent CHS Athletic Banquet, Davis won the Bertha Saunooke Memorial Female Athlete of the Year Award.  The multi-sport standout played volleyball and basketball for four years, track for two years and softball and soccer for one year each.

“Being at Cherokee High School helped me realize what I want to do with my life as an educator,” she said.  “I plan to attend Mars Hill this fall and major in education, eventually get my Masters in Special Education focusing on autism, and hopefully one day make an impact on the lives of my students.” 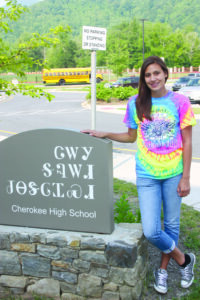 Kayla Smith is the salutatorian for the CHS Class of 2011.

Davis is the daughter of Debora and Shawn Foerst and Jody Davis.  Her mother, Debora, was also the valedictorian of her class at Cherokee High School.

“I am thrilled that Rayna has achieved such as honor,” said Debora.  “It’s funny that she has such a laid-back personality, but she always tackles each challenge with hard work and determination.  These attributes will certainly help her as she starts college this fall and begins her life as an adult.”

Smith is the daughter of Tim and Kissi Smith from the Wolfetown Community.  She plans to attend UNC-Chapel Hill and major in Athletic Training with a minor in Cherokee Language – a new program that is starting at the university this fall.

When asked how it feels to be named salutatorian, she replied, “It’s pretty cool because in middle school I wasn’t in the top five of my class at the end of the year and then coming into high school I was in the top three grade point averages in my class all four years.”

“It’s something that I feel I can be proud of,” she said.  “My grandmother (Tooti Lambert) was the valedictorian of her class.”

Smith was also a standout in several sports including four years in basketball, track and cheerleading; two years in softball and one year in golf.   She was also a member of the Beta Club.