EBCI tribal member Brandi Cooper has a rare bone marrow disease.  Doctors have been unable to determine which of three diseases she has (Aplastic Anemia, Paroxysmal Nocturnal Hemoglobinuria (PNH), or myelodisplacia), but one thing they are sure of is that a bone marrow transplant would cure her….that much is certain. 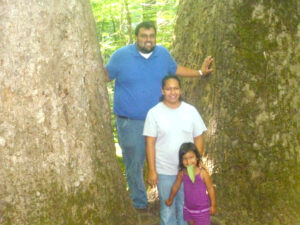 EBCI tribal member Brandi Cooper has a rare disease that requires a bone marrow transplant. A bone marrow donor drive is being organized locally. Brandi is shown here with her husband Cameron and daughter Annasette. (Photo courtesy of Cooper Family)

Several members of the EBCI Health & Medical Division are organizing a blood marrow drive to help Cooper and others like her.   The drive is planned for Wednesday, June 1 at the Cherokee Fire Department conference room.  This is a screening drive for people to sign up for the Bone Marrow Registry.

“My illness was discovered during my pregnancy,” said Brandi.  “After delivery, I was treated by local doctors until my illness became worse recently and I began treatment at UNC Cancer Hospital.  During this treatment, it was discovered that I will need a bone marrow transplant and there are very few Native Americans in the registry and no matches for me.”

Her husband, Cameron, said, “I think this is something we have to push to other tribes as well.  There are possibilities that a Cherokee could match a Navajo or a Choctaw.  We’ve got to get the word out to other tribes.”

To join the registry, you will need to be between the ages of 18-60, meet the health guidelines and be willing to donate to anyone.  Possible donors must meet height and weight criteria and cannot have any of the following conditions according to information from the National Marrow Donor Program (NMDP):

* HIV or risk for HIV

* Hepatitis or risk for HIV

* Most forms of heart disease or cancer

* Recent back surgery or severe or ongoing back problems

* Autoimmune/neurological disorders such as lupus, rheumatoid arthritis or multiple sclerosis

* Being an order or marrow transplant recipient

For more information on the bone marrow drive, call 497-7450.  To learn more about the entire process of bone marrow donation, visit BeTheMatch.org or call 1-800-MARROW-2.