The late President Franklin D. Roosevelt once said, “We cannot always build the future for our youth, but we can build our youth for the future.” 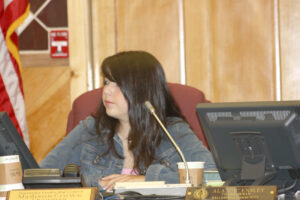 Cherokee youth were working on building a future for the entire Eastern Band of Cherokee Indians as the Junaluska Leadership Council (JLC) hosted a Meet the Candidates forum in the Council Chambers on Monday, May 23.

The forum was held for those seeking the offices of Principal Chief and Vice Chief.  Each candidate was given time for an opening and closing remark and they were each asked a series of four questions from the JLC members on a variety of topics from education to economic development.

In the opening remarks, each candidate was given five minutes to tell about themselves and give a brief overview of their platform.  The order of their remarks and questions was determined by the order in which they filed for office. 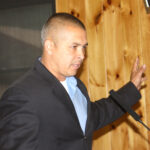 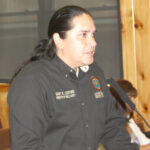 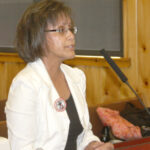 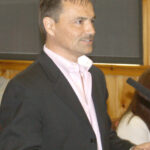 Lambert said the Tribe is currently close to one billion dollars in debt.  “It’s important for us to be conservative.”

Principal Chief Michell Hicks said that he has worked for the Tribe for 24 years.  “When I started, it was a day in time when the finances of this Tribe grew so large that they needed an expert to come forth and manage things.  You have the right person in charge.”

He said that the issue of debt is really big in this election.  “We’ve managed the debt.  We will be debt-free in four years.”

Juanita Plummer Wilson, former EBCI Deputy Administration Officer, said, “I’ve always worked to serve others even when I worked in restaurants, cleaned dishes or cleaned rooms.  I always worked to do my best.  My goal now, even my mission, is to serve our people to the highest degree.”

Gary Ledford, EBCI Director of Public Safety, said that everything should always be done with the best interests of the Tribe in mind.  “We’ve moving forward as individuals.  We’re fractured as a Tribe.  We need to move forward as a Tribe.”

Missy Crowe was not in attendance at Monday’s forum. 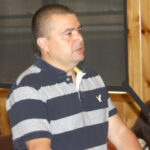 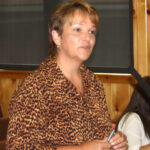 Carroll “Peanut” Crowe, Cherokee Life Center manager, said, “I’ll stand up for the members of this Tribe whether they live on the Boundary or not.  I will stay grounded.  If I am fortunate enough to be put in this office, I will remember who put me in this office.  I will always treat everyone the same and fairly.”

Teresa McCoy, former Big Cove Representative, commented, “We lead by example and it would be hypocrisy for a leader to conduct themselves immorally but decide whether a Tribal employee keeps their job due to a situation they’ve gotten into.”

She also stressed the need for transparency in government.  “If we’re not hiding anything, then put it out there.”

Vice Chief Larry Blythe was unable to attend due to being on travel and Joey Owle had to leave the forum early due to a family emergency.

Candidates were asked their thoughts on how to protect the environment and natural resources on the reservation.

Lambert stressed water quality.  “We’ve got to do a lot to protect the rivers especially.  We’ve got to get our visitors trained to protect our environment as well.”

Chief Hicks said that being neat and tidy is needed.  “I’m disappointed by how we don’t take care of our resources better than we do.”

He spoke of the Environmental Proclamation he issued during his first term in office, “I think that we have to continue to move in that direction and educate ourselves.”

Wilson commented, “We have environmental laws in place.  There is also an Environmental Proclamation from the Chief’s Office.  My goodness, just enforce those.  But, it seems like they don’t walk the talk.  If we have all these laws and a proclamation, then why aren’t we doing a better job?”

Ledford said pollution of the Tribe’s waterways is a serious problem.  He suggested working with other Tribes to address environmental issues in Washington, DC.  “There is strength in numbers with other Tribes.”

Peanut Crowe related that healthy rivers are the lifeblood of the Tribe.  “We need to take measures that there is nothing dumped into it.  I think our water is our most precious natural resource.  I just hope that one day we’re not having to buy water from other counties.”

McCoy said, “Environmental issues are my passion.  I am a gardener and I’m married to a biologist.  My main concern is water quality.  We are not doing enough to make sure our natural resources are protected.  We need to come up with a better solution.”

Lambert said a more diversified economic approach is needed.  “One of my main centerpieces is economic growth for our Tribe.  We’ve got to do things to get away from this casino-driven economy.”

He is in favor of developing eco-tourism opportunities and researching opportunities such as wind energy that could bring eco-jobs to Cherokee.

Lambert said the Tribe should also vigorously pursue federal Section 8 contracts and try to get away from the “rubber tomahawk-type shops”.  He said it is important to create incentives so there will be more locally-based businesses.

“All of those things combined can help us move away from putting all of our eggs into one spot.”

Chief Hicks commented, “Tourism has been our livelihood for many, many years…looking forward, what we have to do is recreate the family environment.”

“We don’t have the land base to compete with the people over the mountain.  Arts and crafts – that’s where this Tribe needs to go.  We have got to create a specific market.  We have to display, in the right way, our abilities.”

Wilson said she doesn’t believe the casino will be profitable forever.  “It’s a dangerous trend that we’re seeing.  Tennessee is looking at getting its own casino going.  What happens when that happens?”

She said the Tribe needs to quit looking into attracting big box stores and corporations.  “Why no invest into our people here?”

Ledford said the lack of economic growth is due to the lack of strategic planning.  “You must drive down your debt, build cash reserves and cancel unnecessary expenditures.”

He said it is important to strive to minimize risk while maximizing returns.  “We have no diversification in the revenue stream.  Cherokee no longer meets that requirement of a family destination.”

Peanut Crowe said, “I think we need to do a lot of strategic planning.  As a Tribe, we need to do our own feasibility studies, not pay a firm to do them.”

He said economic planning is key and he’d like to see the Tribe take ques from the Seminole Tribe of Florida who owns the Hard Rock Café’ franchise and the Mississippi Band of Choctaws who have historically diversified their revenues.

“There’s a lot of investment opportunities out there.”

McCoy said she’d like to see more festivals and fairs to help jump start the economy.  She also said the Tribe should better capitalize on the arts and crafts community, “There’s no reason for Cherokee, NC not to be the American Indian art mecca in the southeast.”

Another idea she presented was for the Housing Department to begin constructing modular units on its own.  She said the units could be sold, at cost, back to the Tribe for housing, and the rest could be sold to other customers for a profit.  “We have the talent.  We just need to start exploiting it.”

For a photo gallery from this event, visit: