An agreement that first began in 1996 will be continued until at least 2018.  Harrah’s, a subsidiary of Caesars Entertainment Inc., and the Eastern Band of Cherokee Indians will be partners for seven more years.

Gary Loveman, CEO and president of Caesars Entertainment, signs an agreement extending the relationship between Harrah's and the Tribe during a ceremony on Friday, May 20 as Miss Cherokee Tonya Carroll and Principal Chief Michell Hicks look on. (SCOTT MCKIE B.P./One Feather photos)

Principal Chief Michell Hicks and Gary Loveman, CEO and president of Caesars Entertainment, signed an agreement continuing the relationship during a ceremony at Harrah’s Cherokee Casino & Hotel on Friday, May 20.

“I know we’ve taken great risks, but we’ve also seen great rewards,” said Chief Hicks.  “We wanted to make sure we put a product out at that customers would enjoy.  Our decision was to make sure that we kept up with the market.” 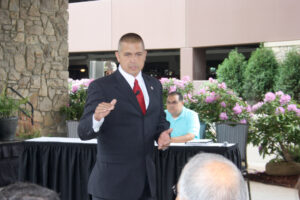 He also addressed the want for table games at the property, “I’m hoping that our Governor will wake up and smell the roses so to speak so we can take that next step.” 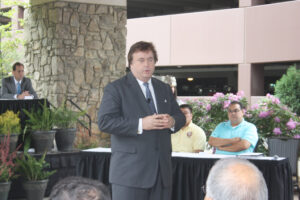 Loveman said he was "honored" to extend the relationship with the Tribe.

As a part of the extension agreement, Harrah’s has agreed to purchase a $1.2 million MRI machine for the Cherokee Indian Hospital.  They also agreed to provide maintenance funds for the machine for a total of just over $2 million.

“We thank you very much,” said Dr. Carmaleta Monteith, Cherokee Indian Hospital Authority board.  “This MRI machine will make a tremendous difference in the care of our patients.”

In 2004, when the agreement was last renewed between Harrah’s and the Tribe, Harrah’s purchased a CT scanner for the Cherokee Indian Hospital.

Loveman spoke during Friday’s event and said, “This is a joyous day for me and for Caesars Entertainment employees all over the world.”

According to Harrah’s, the current construction at the property marks the largest hospitality expansion underway in the Southeast and is the sixth largest construction project in the country.

In January, Harrah’s Cherokee opened its third hotel tower, the 532-room Creek Tower, which brings the hotel room count to 1,108 – the most in the Carolinas.  Paula Deen’s Kitchen also officially opened on the same day.

For a photo gallery of this event, visit: