NEW YORK, NY—Donald “Del” Laverdure, Principal Deputy Assistant Secretary of the Interior for Indian Affairs, addressed the United Nations on U.S. support for the UN Declaration on the Rights of Indigenous Peoples on Thursday, May 19. He emphasized that President Obama holds his Administration to a high standard of action on Native American issues. 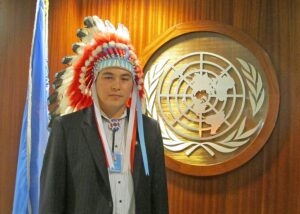 Laverdure’s remarks at the Tenth Session of the United Nations Permanent Forum on Indigenous Issues followed a statement at Monday’s opening session by Kimberly Teehee, Senior Policy Advisor for Native American Affairs in the Domestic Policy Council at the White House.

Laverdure’s appearance represented the first time that an Interior official has spoken at this forum.

Teehee, a member of the Cherokee Nation, and Laverdure, a member of the Crow Nation, both emphasized President Obama’s statement when he announced U.S. support for the Declaration on the Rights of Indigenous Peoples on December 16, 2010 at the second White House Tribal Nations Conference. “What matters far more than words — what matters far more than any resolution or declaration – are actions to match those words,” the President stressed in the December announcement.

Laverdure reaffirmed that the United States is committed to actions that provide meaningful improvement to the lives of Native Americans. He wore his family headdress to commemorate President Obama’s adoption by the Crow Nation.