A total of 18 Tennessee Valley Authority (TVA) coal-fired power plants will be taken offline thanks to a recent agreement.  The plants will be phased out entirely no later than 2018 per the agreement made between TVA and the Environmental Protection Agency (EPA), the Sierra Club, National Parks Conservation Association (NPCA), Our Children’s Earth Foundation and the states of Alabama, Kentucky, North Carolina and Tennessee.

“This agreement will save lives and prevent billions of dollars in health costs,” said Lisa P. Jackson, EPA administrator.  “Modernizing these plants and encouraging clean energy innovation means better health protections and greater economic opportunities for the people living near TVA facilities.  Investments in pollution control equipment will keep hundreds of thousands of tons of harmful pollutants out of the air we breathe, and help create green job opportunities that will reduce pollution and improve energy efficiency.” 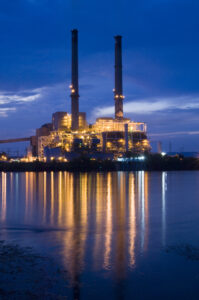 Six units at Widows Creek Fossil Plant near Stevenson, Ala. are set to close. (TVA photo)

Tom Kilgore, TVA president and CEO, commented, “Diversity proved to be the most prudent course in meeting future energy needs in all the various future scenarios we studied.  A variety of electricity sources, rather than heavy reliance on any single source, reduces long-term risks and helps keep costs steady and predictable.”

Many say this move will help improve the air pollution and ozone problem in the Great Smoky Mountains National Park – the nation’s most visited national park and one that has been on the NPCA “Most Endangered National Parks” list due to poor air quality.

Mary Ann Hitt, Director of the Sierra Club’s Beyond Coal Campaign, said, “By phasing out the most dangerous coal plants and charting a course focused on less pollution and more clean energy, TVA is demonstrating that we don’t have to choose between clean air and affordable energy – we can and must have both.”

TVA also introduced its new Integrated Resource Plan which, according to officials, “recommends a strategic direction focusing on a diverse mix of electricity generation sources, including nuclear power, renewable energy, natural gas and energy efficiency, as well as traditional coal and hydroelectric power.”

According to the EPA, TVA currently operates “59 coal-fired boilers at 11 plants in Alabama, Kentucky and Tennessee.”

EPA relates the following power plants are involved in the settlement:

* Colbert Fossil Plant in Tuscumbia, Ala.