Cherokee senior Hannah Youngdeer will be wearing maroon and orange next year as opposed to her usual maroon and gold.  She signed a letter of intent on Thursday, May 12 to play softball for the Maryville College Scots next season. 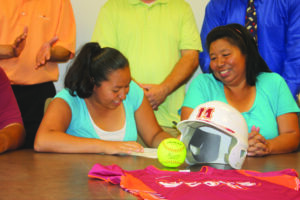 Hannah Youngdeer, CHS senior, signs a letter of intent on Thursday, May 12 to play softball next year for Maryville College as her mother Carmen Davis looks on. (SCOTT MCKIE B.P./One Feather)

“It’s an honor and it’s exciting,” she said.  “I want to do the best I can while I’m there.”  Youngdeer related that playing softball at the collegiate level has been a dream of hers since she started playing the game at the age of 11.

Her father, Michael Youngdeer, was excited at the thought of his daughter’s dream coming true.  “It’s good for her.  I’m glad for her.  I don’t take any credit for it whatsoever.   Whatever she does, she does naturally.   It’s just an awesome feeling to see her actually signing a letter.”

Hannah’s mother, Carmen Davis, was also elated at Thursday’s signing.  “She’s always wanted to play in college since she started travel league and little league.  It’s always been her dream.”

CHS Athletic Director Ian Roper commented, “It just shows how hard our kids our working in our athletic program and how we’re really building.  We’re really moving forward.  It’s just so exciting for one of our kids to get an opportunity to go on and play at the next level.”

Maryville College is a NCAA Division III school and is a member of the Great South Atlantic Conference which includes colleges such as La Grange, Wesleyan, Spelman, Agnes Scott and others.  The Scots softball team had a record of 18-24-1 (10-2 conf.) in 2010 and they went 14-20 (8-4 conf.) this year.

For a photo gallery from this event, visit: