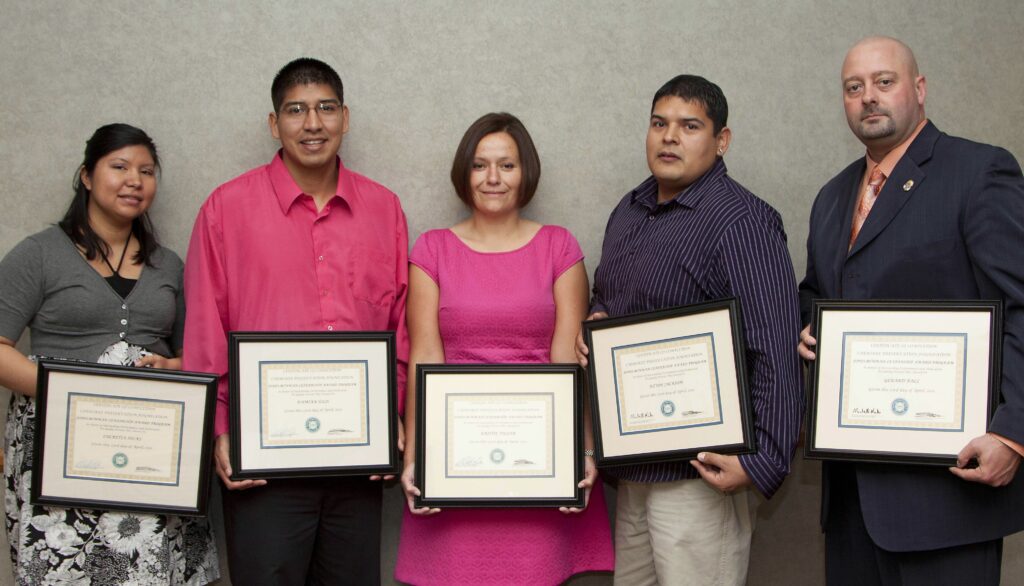 Six young leaders who have recently earned undergraduate or graduate degrees and have completed their Jones-Bowman Leadership fellowships were honored last week by Cherokee Preservation Foundation and the families of the late Principal Chief Leon Jones and the late Mr. James Bowman, for whom the program is named.

Gerard Ball, Kristie Fuller, Kevin Jackson, Lucretia Hicks, Sky Kanott and Damian Solis completed the Jones Bowman Leadership Award program, which is open to undergraduate students who are enrolled members of the Eastern Band of Cherokee Indians and have leadership potential they are committed to developing through a fellowship.  Five were in attendance at an April 23 luncheon and received Cherokee baskets and framed certificates at the event.

Ball earned three degrees while participating in the Jones-Bowman program, including a Master’s degree in Strategic Leadership from the University of Memphis.  Kevin Jackson earned a bachelor’s degree in business from Montreat College.  Lucretia Hicks graduated from Wake Forest University with a bachelor’s degree in Health and Exercise Science.  Damian Solis, Kristie Fuller and Sky Kanott earned bachelors’ degrees from Western Carolina University — Solis in Sports Management, Fuller in Nursing and Kanott  in Communications.

Also attending the banquet were Jones-Bowman Fellows Joey Owle, Jessica Munson, Kelsey Standingdeer and Noah Wachacha, who are still pursuing their studies and have applied for continued participation in the program.

For complete information about the Jones-Bowman program, including how to apply, visit www.cpfdn.org/jonesbowman.html or call Alicia Jacobs at 828/497-5550. The deadline for applications is May 20.