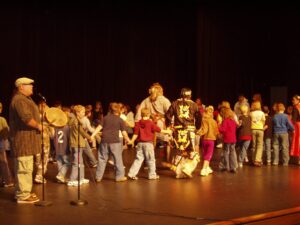 John Grant Jr. began each of the school assemblies with a haunting melody played on the Indian flute.  He then told the story of how the flute came to be and how it led to the Native Americans inventing running water.  Joseph Toinetta played the drum and sang while John Grant Junior, dressed in Cherokee garments from the late 1700’s, did the Men’s Southern Straight Dance sometimes referred to as the Gentlemen’s Dance.

SCHS senior and EBCI tribal member, Kele Crisp, performed the Women’s Fancy Shawl Dance or the Butterfly Dance wearing colorful, traditional clothing.  This was followed by a performance of hoop dancing by Daniel Tramper, three-time World Hoop Dance Champion.  He created different designs, such as a butterfly, rose, eagle, Mickey Mouse, basket and world, while dancing with as many as eleven hoops. 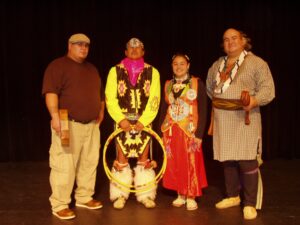 Native American stories, history and language were interwoven throughout all the programs by John Grant Junior.  The two elementary school assemblies ended with about 50 students going up on the stage to participate in the Friendship Dance.  All five assemblies gave the students and the teachers in the audiences the opportunity to learn about and experience Native American stories, music, dance and language.

These assemblies celebrating Native American culture received support from the North Carolina Arts Council, a division of the Department of Cultural Resources.

Swain County Center for the Arts is located at Swain County High School, 1415 Fontana Road, Bryson City, NC  28713.  For more information call Eugenia Johnson at 828-488-7843.  Go to www.swain.k12.nc.us/cfta to view the current calendar of events or to get directions.

Eugenia is the director of the Swain County Center for the Arts.