Taylor retires from Cherokee Hospital with 30 years of Service

Truman Taylor retired on Friday, Nov. 11, with 30 years of service to Cherokee Indian Hospital.  Truman began his career with the Housekeeping department on Nov. 1, 1980 where he worked part time at the hold hospital.  He transitioned over from federal to tribal in 2002. 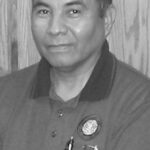 Truman worked under Mr. Russ Bradley, Ms. Becky Butler until she retired in 2009, and Mr. Jason Littlejohn this last year.

His career has been one of healthy living, as evidenced by his amassing of over 1,900 hours of sick leave.

Truman’s current non-hospital activities include Golf, which he says is getting better and better and with more practice and hopes will remain under 100. Other activities he has participated in were softball and basketball.

Some of Truman’s most memorable moments at the hospital:  conversing with many of the tribal members who came in sick, the Halloween Haunted Houses (when the New ER was the old OB/Gyn. dept.), the numerous dinners and employee functions, and the spring flower plantings.

Upon retirement, Truman says that he plans to continue to “piddle” around the house and catch up on all his overdue “Honey Do” lists.

His future plans include:  Becoming more involved with church activities, travelling to Gatlinburg/Pigeon Forge more often, and spending time with his wife and “great” grand babies.

When asked what he would like to see for the future of the hospital, he said that he was in favor of expansion of specialty services including contracting and would love to see the continued teamwork shown between all the departments.

“Truman has always been the kind of person who has kept a positive attitude.” related Cherokee Hospital officials.  “He is compassionate for the sick and has been a role model to the community.  He has always volunteered his time when others could not.  Truman takes pride in everything he does and it shows especially here at Cherokee Indian Hospital. His quiet mannerisms and gentle laugh have endured him to the staff here and he will be missed.”