Bo Taylor was not at the 12th Annual Native American Music Awards (NAMMYs) held recently at the Seneca Niagara Hotel and Casino in Niagara Falls, NY.  But, his name was surely called. 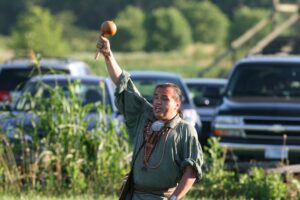 Bo Taylor, an EBCI tribal member, sings a Buffalo Dance song during a celebration at the Kituwah Mound. He recently won a NAMMY award in the Best Traditional Recording category for his album entitled Rebuilding the Fire. (Photo by Dawn Arneach/One Feather)

Taylor, an EBCI tribal member, won the award for Best Traditional Recording for Rebuilding the Fire, a collection of Eastern Cherokee songs.

Released on Deerstar Productions, the 13-track album contains songs associated with many Cherokee traditional dances such as the Corn Dance, Quail Dance, Beaver Dance and others.

“Initially, I didn’t think I was going to win, I always thought it was a popularity contest,” said Taylor who related he didn’t campaign for NAMMY votes at all.  “I really didn’t even think I had a chance.  I didn’t promote it, go on Facebook or anything.”

Taylor said, first and foremost that he wants to credit EBCI tribal elder Walker Calhoun for helping him with songs and dances over the years.  “I’ve sat beside him and listened to him sing and I owe bunches of credit to him.  I want to honor him.”

In his acknowledgments on the album, Taylor says to Calhoun, “I owe you a debt that I can never repay.  You gave of yourself, not only to me, but to all who would come.  Your life has inspired me and countless others.”

And, Taylor hopes to be an inspiration to others as well.

He donated copies of his album to the New Kituwah Language Immersion Academy.  “The reason I made this album is I don’t want to be the only person singing these songs.  I hear my girls coming home and they’re singing our songs and it makes me happy.”

The album is accompanied by liner notes briefly describing each dance and song.  For instance, the Buffalo Dance is described thusly, “The dance mimics the buffalo as they grunt, stamp and jostle one another.  Buffalo were an important animal to the Cherokee for food and clothing.  There is a Cherokee town that carries the name Buffalo.  The last buffalo in Cherokee country was killed near Asheville, North Carolina circa 1790.”

As a member of the Warriors of Anikituwah, Taylor performs these songs and dances at various cultural events all across the country.   “That’s the thing about Rebuilding the Fire, it talks about the fact that the fire is essential to who we are and by singing these songs and learning our dances and stuff, we can rebuild who we are.”

Other nominees in the Best Traditional Recording category included:

For a complete list of NAMMY winners, visit www.nativeamericanmusicawards.com.