ROBBINSVILLE – In 1910, the Col. Joseph Winston Chapter of the Daughters of the American Revolution (DAR) honored famed Cherokee warrior Junaluska by placing a boulder monument at his gravesite near Robbinsville.  One hundred years later, EBCI tribal members Sierra Wachacha and Jazlyn McEntire placed a wreath in his memory during a ceremony held at the site on Friday, Nov. 12. 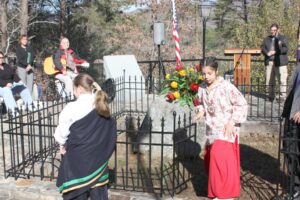 “We’ve come here to remember Junaluska as a great warrior and a great man – a leader of his people,” said Dr. Brett Riggs, UNC – Chapel Hill, who was a guest speaker at Friday’s event.  “I think he would be very proud of the strides the Tribe has made.”

Robyn Rutledge, DAR Col. Joseph Winston Chapter, said that the chapter began working on the project in 1907 and it was one of the first historical monuments erected by the group. 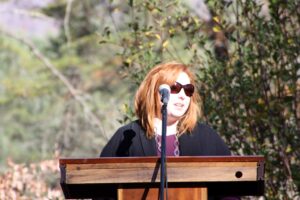 Robyn Rutledge, DAR Col. Joseph Winston Chapter, spoke of the history of the monument which was erected by the DAR Chapter in 1910.

“We honor people who inspired history,” she said.  “This spot has become a place where we can learn about Junaluska.”

Rutledge said she researched Chapter minutes from the era and tried to find out why the boulder was chosen for the monument.  “I never found a clear answer as to why the boulder.”

But, she said an answer might lie in minutes from November 1910 which read, “Our first meeting of the past year was marking the grave of the grand old Indian Chief Junaluska. Through his loyalty to the whites and the great service rendered Andrew Jackson at the Battle of Horseshoe Bend…was considered One of the few immortal names That was not born to die…This huge granite boulder marked by a bronze tablet is especially appropriate, typical of the strong, noble character of the old Indian chief.” 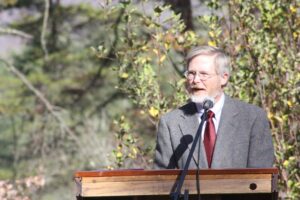 Dr. Brett Riggs, UNC - Chapel Hill, was a guest speaker and told some of the historical accomplishments of Junaluska.

Tommy Chekelelee, an EBCI tribal member from the Snowbird Community, gave acknowledgments at Friday’s event.  He commended the work of the late Jim Bowman, a former Tribal Council member who was instrumental in expanding the monument area at the Junaluska gravesite.

“Twenty years ago, if you can imagine it, the only think up here was the boulder and the fence,” said Chekelelee who related that the expanded monument area now includes a Medicine Trail that recognizes Snowbird people that have made an impact on the community and stone markers commemorating the seven clans of the Cherokee people.

Vice Chief Larry Blythe welcomed everyone to Friday’s event and told of Junaluska’s accomplishments and sacrifices including saving the life of Andrew Jackson at the Battle of Horseshoe Bend.

“Hopefully, as we wake up each morning we thank the Creator that we’re still here in our homeland,” said Vice Chief Blythe, “and that we can continue to fight to regain what was taken.”

The Steve Youngdeer Post 143 posted and retired the colors, and the N.C. Army National Guard Honor Guard performed a flag unfolding ceremony and presented a U.S. flag to the familial descendants of Junaluska.