Veterans honored at Ceremony in Cherokee 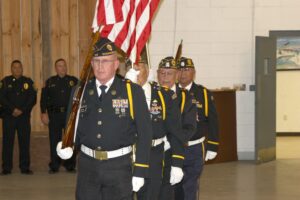 “If we had to choose one word that would describe you best I think it would be faithful,” Ray Kinsland told veterans and community members assembled on Veteran’s Day on Thursday, Nov. 11.  “We are eternally grateful for your service, your sacrifice and your spirit.”

Kinsland served as the keynote speaker for the event, hosted by the Steve Youngdeer American Legion Lost 143, at the Cherokee Indian Fairgrounds.  Following his speech, he was honored with a Lifetime Achievement Award from the Post. 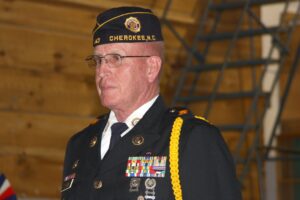 Warren "Hoppy" Dupree was named Legionnaire of the Year.

Post 143 Commander Lew Harding thanked the community for their support and said that it is important to remember the sacrifices made by hundreds of thousands of veterans across the country.

“Sometimes it’s easy to forget what they’ve done,” he said.  “They don’t brag.  They love their country and they’ve proven it time and time again.”

Harding added, “Veterans have made enormous sacrifices.  We very much appreciate all that they did.  God bless our people.  God bless our veterans on this day and every day.  You are our heroes.” 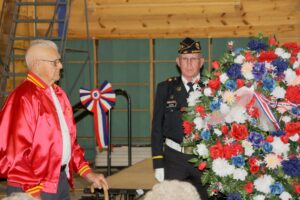 Robert Youngdeer, distinguished Marine Corps veteran and former Principal Chief, and Warren Dupree stand at attention after helping place a wreath at the podium in honor of fallen soldiers.

Public servants were also honored during the event and several awards recognizing their contribution to the community were given including the following:

Following the awards, a wreath was placed at the podium to honor fallen soldiers.

Legionnaire Phyllis Shell, a U.S. Army veteran, closed the program with a musical performance of “An Honor to Serve”.Photo gallery of event: