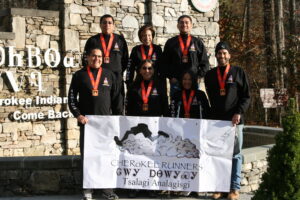 Both of these races were held in the Washington, D.C. area with both finishing at the Iwo Jima Memorial near Arlington Cemetery.  Competitors in the marathon were:  Jimmy Oocumma, Brian Burgess, Robin Swimmer, Stephan Swimmer, Skye Littledave, Chris Reed and Gerri Grady.  Runners in the 10K were:  Marlene Arch, Sean Grady, Karleigh Reeves, Brian Driver, Pam Sneed, and Dawna Paul.

“I had a lot of fun running in the Nation’s Capitol,” said Paul.  “It was great being cheered on the whole way and then to be given a medal at the end by a marine – that made the whole experience.  I kept thanking all of them along the way for keeping me and my country safe.” 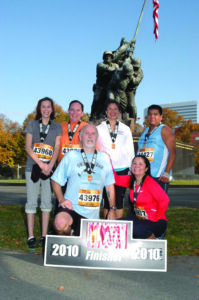 The Marine Corps Marathon was the first marathon for several of the runners and they started with over 30,000 other runners from all over the United States.  Of the 30,000 that started the race, over 8,000 did not finish, but all seven from Cherokee crossed the finish line.  The group from Cherokee that competed in the 10K started the race with over 10,000 runners, again, from all across the country.  Some of the runners for both races ran with injuries and competed with courage and conviction.

Only a few days after the Marine Corps races, three Cherokee Runners competed in the Haywood Heroes 5K (3.1 miles).  Dawna Paul, Karleigh Reeves and Pam Sneed ran and all three placed in their age groups.

Another Cherokee Runner competed in her first marathon the same weekend as the Washington race.  Natalie Welch ran the Spinx Runfest Marathon in Greenville, SC, coming in 4th in her age group.  This is a great accomplishment that Natalie has been training and planning for many months.

The Cherokee Runners would like to thank their families for the support and encouragement that each have received over the last several months of training.  We would also like to thank Chief Michell Hicks for his support and for running with us when he can.