Bridge to be renamed for Medal of Honor Recipient 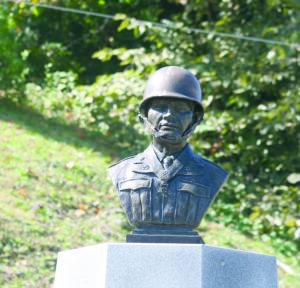 A bust of Pfc. Charles George sits atop a monument at the Cherokee Veterans Monument.

A local bridge will be renamed to honor one of the greatest American Indian military heroes of all time.  Pfc. Charles George, an EBCI tribal member, gave his life on the night of Nov. 30, 1952 near Songnee-dong, Korea by jumping on a live grenade thereby saving several of his comrades at the expense of his own life.  That heroic act earned him the Medal of Honor, the highest military honor bestowed upon soldiers in the U.S. Armed Forces. 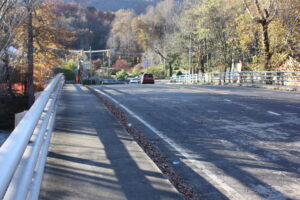 A local bridge (shown above) will be renamed in honor of Medal of Honor recipient Pfc. Charles George. (Photos by Scott McKie B.P./One Feather)

Fifty-eight years later, a bridge will be named in his honor in Cherokee.

Tribal Council passed Resolution No. 513 on Wednesday, Oct. 27 that gave approval to rename the bridge located at the intersection of the Museum of the Cherokee Indian, Qualla Arts & Crafts and the Cherokee Historical Association in honor of Pfc. George.  The resolution was submitted by kindergarten and first grade students at New Kituwah Language Academy.

“As part of these students’ education, they are encouraged to participate in civic activities that benefit their communities, including honoring our men and women who have served in the Armed Forces on behalf of our country,” the resolution states.

Renissa Walker, Kituwah Preservation and Education Program manager, stated that the idea for the naming of the bridge came out of a growing relationship between the Steve Youngdeer American Legion Post 143 and the students at New Kituwah.   “It is more than just naming a bridge, it is building a relationship with the veterans in our communities.”

It started with the students performing at an event in September at the request of the Post.  The students asked the Legionnaires to come back during the week of Veteran’s Day and do a presentation for the school.

“During our discussions, we talked about how disappointing it was to drive by and not see the Charles George gym anymore,” said Walker.  “We felt that this was one thing we could do to honor the veterans.”

Walker said the concepts of patriotism and love of country are some of the values they hope to instill in the children at the school.  “We want that concept to be something that is engrained into the fabric of the school.  Our students, as they grow up, will be able to drive by that bridge and know that they played a part.”

Principal Chief Michell Hicks stated, “Congressional Medal of Honor recipient Charles George was a hero to our people and to our country.  George’s heroic acts in saving his fellow soldiers in Korea are worthy of remembrance and bestowing his name on a bridge in Cherokee is one way we can ensure our people and the millions of visitors who come to Cherokee know of his legacy.”

George, a member of U.S. Army Company C 179th Infantry Regiment, was one of 133 Medal of Honor recipients in the Korean War according to the Congressional Medal of Honor Society (CMOHS).

The full text of Pfc. George’s Medal of Honor citation can be found online at: https://www.history.army.mil/html/moh/koreanwar.html.