Scott Wolter, forensic geologist, presented his findings on the Bat Creek Stone in Tribal Council Chambers on Wednesday, Oct. 27.  This artifact was excavated from a Cherokee mound in 1889, and is inscribed with writing, that according to Wolter’s forensic examination, is older than its date of excavation in 1890, and may in fact be thousands of years old. 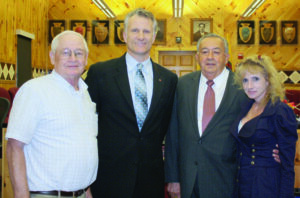 “If this artifact shows European contact with the Cherokees two thousand years ago, then this is a significant part of Cherokee history,” said EBCI tribal member Don Rose, who commented after Wolter’s presentation.
Wolter conducted microscopic examination of the artifact at the University of Tennessee in May of 2010, and then used their Scanning Electron Microscope to conduct a more in-depth study.  He concluded that the most modern marks on the stone were made after 1890.

Another mark that he examined was made by a metal probe when the stone was excavated in 1889.  He found that the inscription was carved much earlier, because the grooves in the letters were weathered much more than the other marks.  The other items found with the stone in the mound were dated to about 100 AD.

“The best research shows that the inscription is in Paleo-Hebrew,” Wolter said, citing the work of Hugh McCullough.   Other scholars have claimed that the text is Phoenician, ancient Cherokee, or a hoax.  Wolter has written several books and produced several documentaries for the History Channel about European contact in American before Columbus, including “Who Really Discovered Americaaired this year.

The Bat Creek Stone is currently on display at the McClung Museum at the University of Tennessee.  It is on loan from the Smithsonian, who financed the original excavations of the Bat Creek Mounds, a few miles west of present-day Vonore, Tennessee.  The Smithsonian’s purpose was to determine who the Moundbuilders were, and Cyrus Thomas concluded that they were the ancestors of the present-day Cherokees.

– Source: Museum of the Cherokee Indian