FRANKLIN – The Cherokee Mites capped off their season by defeating the Murphy Bulldogs 12-6 to win the 2010 Cracker Bowl on Saturday, Oct. 30.  Cherokee DB Isaiah Evans picked off a Murphy pass with less than a minute left in the game to seal the victory for the Braves. 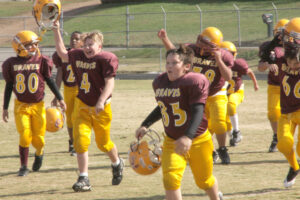 The Cherokee Mites celebrate after winning the 2010 Cracker Bowl over Murphy 12-6 on Saturday, Oct. 30. (Photos by Scott McKie B.P./One Feather)

Cherokee got the ball first to start the contest, but were unable to move it and turned it over on downs.  Murphy took over 1st and 10 at the Cherokee 49-yard line.

On second down, Cherokee’s Issiah Bradley intercepted a ball and returned it 20 yards to the house for the first score of the game.  The two-point conversion failed and Cherokee led 6-0 at the 2:48 mark in the first quarter. 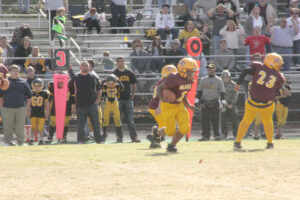 Isaiah Evans (#2) intercepts a Murphy pass with less than a minute to go in the game to seal the victory for the Braves.

Murphy started their next drive at the Cherokee 40-yard line.  Following an off-sides penalty on the Braves and a subsequent holding penalty by the Bulldogs, Murphy’s Kadrian McCray ran the ball on first down to the 7-yard line.

Cherokee’s defense held tight on the first two downs, but McCray ran it in for a score from six yards out on third down.  The two-point conversion failed and Murphy tied the game at 6-6 with 2.6 seconds left in the quarter.

The Braves started the second quarter at their own 48-yard line.  Evans got the call on the next two plays and carried the ball to the 23-yard line on rushes of 16 yards and 9 yards. 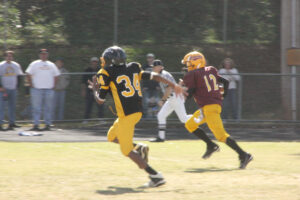 Braves QB Ty Mintz (#12) takes a quarterback keeper 23 yards to the house in the first half as Murphy's Kadrian McCray tries to catch him.

On the next play, Braves QB Ty Mintz bolted 23 yards for a touchdown to put Cherokee up again.  The two-point conversion failed and Cherokee led 12-6 with just over seven minutes left before the half.

The Bulldogs started their next drive at their own 39-yard line, but it was short lived as they put the ball on the ground on third down.  It was recovered by the Braves who set up shop at the Bulldogs 45-yard line.

Cherokee drove down to the 18-yard line before a holding penalty took it back to the 23 and one play later McCray intercepted a Braves pass and returned it to the 37.

Murphy was unable to move the ball and time expired on the half.

The Bulldogs received the ball first in the second half, but they wouldn’t have it for too long.  Demetrius Bradley recovered a fumble for the Braves at the Cherokee 40-yard line on the third play of the half.

They weren’t able to capitalize on the turnover and had to punt the ball.

Murphy, in turn, was unable to move the ball and turned it over on downs to end the third quarter.

Cherokee punted on the next possession and Murphy started their final drive of the game at the Cherokee 45-yard line with just over three minutes to play.

The Braves defense held them to just a few yards on the first three plays and the Bulldogs faced a 4th and 2 from the 37-yard line.

Bulldogs QB Joey Curry kept their drive alive by converting the first down on a quarterback keeper to the 33.

Cherokee’s defense tightened it up again, and held them to little or no gains on the first three plays to set up a 4th and 8 from the 31.

It was then that Evans intercepted a Murphy pass to seal the deal for the Braves.  Cherokee ran out the clock and took home the Cracker Bowl Championship.Photo gallery of event: