COMMENTARY: How should we treat Kituwah?

Cherokee people have the immense privilege of having access to our Mother Town. Kituwah, and what remains of the mound, was signed into trust by the Bureau of Indian Affairs and Department of the Interior in December of 2021. This move came 25 years after the Eastern Band of Cherokee Indians (EBCI) bought the land back.

Kituwah is one of the most spiritual places for Cherokees. It is used for ceremony and is typically discussed with the upmost respect and admiration, especially amongst our elders. 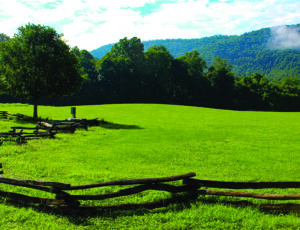 With all that in mind, why do we host casual sporting events at this sacred site?

I find myself asking this question every year. I’ll forget, and then I’ll see a regular season cross country event taking place there on an odd Saturday. Don’t get me wrong, I feel Cherokee folks should be able to experience this place and feel happy and welcome at all times. However, most of the people attending these events do not have a true understanding of where they are.

We have runners from all over the region coming to compete on our ceremonial grounds with little to no grasp of how important that land is to our people. Personally, I feel we are doing a disservice to Kituwah by treating it this way.

We are so lucky to have this landmark. How many nations in this country and across the world have had their most important relics and motherland taken from them? We were forced to purchase our Mother Town back in 1996 and thank goodness we had the means to do so.

I will offer some credit to recent organizers. I understand that there has been a message pushed out to coaches and athletes that they are performing at a cultural site. There are instructions not to go on or near the mound itself. These are good steps to be sure, but they should be given to the general public as well. As much as I appreciate educating others about this site, I still don’t get why there needs to be non-traditional athletic events hosted on this land. The last thing I want to be worried about is a random group of high schoolers goofing off around what in my mind is the most sacred site to the Cherokee people.

I would be remiss if I did not take a moment to congratulate our Cherokee runners this year. By no means should this commentary be perceived as an attack or critique of their efforts and success. Both Dvdaya Swimmer and Amaya Hicks represented the EBCI at the state championships this month as individuals, and I am tremendously proud of them. I would also like to recognize the Cherokee men’s team who ran at State. Jaylan Bark, Tyce Hogner, Aizen Bell, Tanin Esquivel, Tanis Esquivel, Aydan Thompson, and Oztin Swayney – we are very proud of you. They have the absolute right to train at Kituwah. It’s the overall competition that I have an issue with.

If I’m the only one who holds this belief, I think we can at least agree that more education is necessary. If they are to maintain sporting events at our more sacred of sites, an impetus most be placed on education. Before, during, and after the competition. If the races are to stay, the significance and honor of performing at Kituwah should be understood and at the forefront of conversation.

And truly, my gripes are not just with the sport itself. I feel there needs to be a heightened level of respect for this area in general. One of the most furious moments of my life came during a walk around Kituwah. Being there brings me peace, and it had not been the best of days. You could understand the rage that came over me when I saw a number of beer cans littering the area. Friends have told me about picking up used needles along the path. I cannot fathom that level of disrespect.

I don’t take non-Cherokees to Kituwah very often. Only when I’m convinced of their mindset. Even then, I will offer as much background as I can and insist that they remember where they are. I’m not advocating to ban non-indigenous folks from the site. I simply want people to think a little more about how lucky we are to have this place.

I feel if it is to be as open as it currently is, there should be some educational resources for visitors. I appreciate that ‘it is a nice place to walk’, but we can’t expect people to be respectful if they don’t know.

In a similar vein, I think it’s important that our own people take time to cherish Kituwah. I hope that we host more culturally focused community events involving our Mother Town. We have our annual celebration and a few other events there already. It should be an area of immense respect and celebration. Cherokees need to take pride in Kituwah as much as we do our crafts and our language.

Let’s makes sure that the grounds are well maintained. The large hanger was removed with plans of establishing a more comfortable and inviting structure, which I hope happens soon enough. I also hope we place an emphasis on the Kituwah gardens and farms. We need to more closely monitor litter, and an act like that should enact a steep penalty. I should not feel the need to bring a trash bag to a ceremonial site.

I am writing this not to belittle a sport or to call out anybody. My motivation is to advocate for cultural education and respect. To promote the power that is Kituwah. That town is one of the most important places on Earth to me. I hope that sentiment is shared with anyone that visits.