COMMENTARY: Paying attention to the lynchpins.

It doesn’t matter if you are doing a gigantic, multimillion-dollar project or a relatively small event, neglecting the details of planning can be costly and even result in critical failure. What may seem to be a small cog in the big machine of an operation may just be the lynchpin to the entire project. 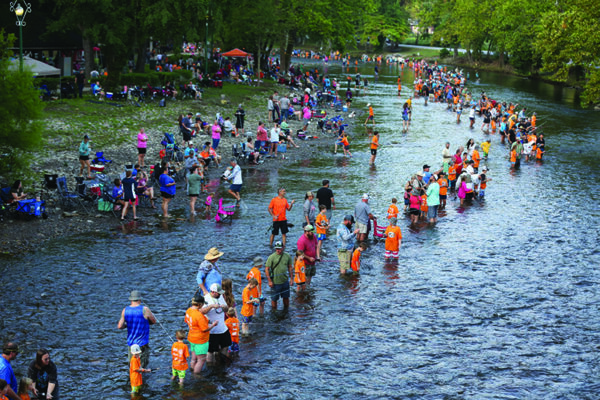 For those not familiar with lynchpins, the literal lynchpin is a short pin or spike that fits through a hole in the end of an axle. Once the wheel is placed on the axle, the lynchpin is inserted across the axle to prevent the wheel from falling off. You didn’t want to be on a wagon where a lynchpin was missing, because eventually, sooner rather than later, there was bound to be a disastrous outcome once the wagon went into motion. Small, seemingly insignificant, the lynchpin was and is critical to keep the wheel on the cart and keeping disaster from occurring.

When I came on board as a tribal employee back in 2001-2002, I had the privilege to work with Dave Ensley and the team that created the Talking Trees Children’s Trout Derby. Dave and this planning group had a vision for a unique event bringing families together through one of the most valuable resources that our Tribe manages – our waterways and the abundance of trout in them. They created a fishing derby for kids like no other.

Once the word was spread about the Derby, the Oconaluftee Island Park would be filled-to-capacity with children and their parents (and many times grandparents) to enjoy the fun of fishing. Dave would say in the meetings that people underestimate the therapeutic benefits of fishing (paraphrasing). And we do.

Family time is something that has increasingly gone by the wayside. Young people, and now even more “mature” people, are spending more time texting or messaging than they do talking in-person with their families. Even when you catch them sitting down to a meal together, half of them have their “smart” phones in front of their faces in silence. As a side note, isn’t it ironic that the television became known as the “boob tube” because it turned us into mental zombies when we got in front of them, but we get in front of the screen on a phone and call it “smart”? Who would have thought in those beginning years of the Derby that so many families would enjoy coming together for a few hours of just being a family? Dave did.

And for years, various programs and tribal government staff have coordinated the execution of the Derby. When you have a couple of thousand kids and a few thousand family members coming to breakfast and then enjoying a few hours of one of your most valuable assets, you want to make sure that you plan accordingly. There are so many details that must be attended to so that the community members and visitors that come to the derby are safe and have an enjoyable experience. From Island Park excavation (making sure the previous year of flooding hasn’t eroded the shoreline and to create fishing spots that are safe for children) to securing the materials (down to making sure that there are enough fishhooks, sinkers, and bait), every box on the checklist must be addressed to have hopes of a safe, successful event.

Some of the unsung heroes of the Talking Trees Trout Derby are community members like Lisa Frady and Frieda Huskey Simons, who have been tasked over the last few years with the coordination of the Derby. They have a dogged passion for the event, particularly Lisa. Part of her zealousness for the event might be that she has had children of her own who are the right age to have participated in multiple years of the Derby, so she knows first-hand the value of the family experience. Another part is that she also has a passion for the Cherokee community and knows that this is one of those events that locals love to enjoy. Whatever her reasons, she pours energy into the event and pushes for more attention and resources for it.

Lisa, one of the coordinators of the Trout Derby, shared a story with me from the parents of one of the prize winners. A young man from the Asheville area drew and won one of the largest prizes offered at the derby. The back story that the parents shared was that the youngster earlier had been saving up for what he had won (he had no way of knowing he would win the prize at the derby). He had saved around a thousand dollars toward the purchase. Also earlier, the young man found out a need in his church and said that he wanted to give all that he had saved toward that need. His parents asked if he was sure he wanted to do that, because he would have to start all over again with his saving for the item he wanted, and it would be that much longer before he could have it. The young man chose to give all his money to the cause. Little did he know that he would end up winning the item he wanted when he entered the derby. Lisa said that it is those moments that make all the blood, sweat, and tears that go into planning the derby worthwhile.

I always sweat the small stuff. It has been my experience that the devil is in the details when it comes to planning and execution. Those small lynchpin items can make or break any plan, big or small. And someone must do it. And we definitely need our visionaries and big picture thinkers like Chris McCoy, Sabrina Arch, Kristy Maney Herron, and Mike Parker when it comes to all the moving parts that are the commerce of the Qualla Boundary. And when you are looking at a big, strategic picture, you may be looking at thousands of lynchpin items that could cripple or completely collapse your execution. And as good as these leaders are, it would be challenging if not impossible to keep close eye on every aspect of a plan or project as expansive as that of the Boundary commerce. So, it is even more critical to have those people in place that have smaller pieces of the economic pie with a smaller portion of the lynchpin items to pay attention to those details. Masters of the small stuff. As Lisa is famous for saying, it is “simple math”. The smaller the piece that you are working on, the easier it is to pay attention to all the aspects of the project.

I had the privilege to work with both Lisa and Frieda on some of those small projects that make up the big picture when it comes to event planning and execution in years gone by. There are so many others, not just in the Commerce Division, but throughout the Tribal workforce who are daily ensuring that the wheels don’t fall off the efforts of the Tribe. Critical services like health care, child and elder care, social services, water and sewer, facilities management, housing, planning and development, construction, sanitation, treasury and finance, the tribal lawyer corps, law enforcement, wildlife management, courts, legislative support, and many others. All with great leadership through management, and great leadership through all those individuals who are” small cogs” in the big machine of our Tribal government. Every critical service of the Eastern Band of Cherokee Indians is provided by folks like you and me, and they have a particular passion or zeal for their projects, and they are charged with making sure the lynchpins stay in place.

Thank you and congratulations to the Commerce Division from management to those with executional responsibilities. You provided a safe and enjoyable event for our community and the guests who brought their children to enjoy the Tribe’s hospitality. Surely, the Tribe benefits through the great public relations this event provides in addition to the overnight stays and ancillary purchasing the visitors contribute to the local economy that come from the derby. It pays to sweat the small stuff. To me, more importantly, you are caring on the culture and traditions of the Tribe, just the way Dave and the originators of the Derby had intended. Well done.