COMMENTARY: It is just a pet.

I recently posted a picture of Smoky, a chihuahua that was a part of my family for 13 years. He was eight weeks old when we got him. I have a picture of him in my hand on his first day with us. From head to tip of tail, he fit between my index finger and wrist, a tiny ball of fur, flesh, and bone. A tiny life. 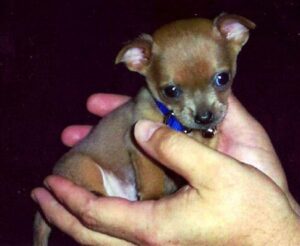 Smoky was not our first pet. After I married my wife, she endured my flirtations with fish, birds, and even a tarantula named Rosie. She drew the line at reptiles, particularly snakes. When we wed, she was not a big fan of the idea of having an indoor dog (thus my trials with many other species).

But when my sister brought her six-month-old pup over to my mother’s house one day early in our marriage, we met the pup that would melt both of our hearts and when we found out that my sister was willing to sell, we gave that pup a new home. He quickly and completely dug his paws into our hearts and for twelve years, was our constant companion. It was this pup that taught us that dogs, particularly ones kept indoors, become family. No everyday activity happened without the constant supervision of this little dog. Very few things happened around the house out of his sight. I started feeling like he was a government spy.

The night that he died is etched in my mind. We were getting ready to settle in for the night. The three of us would sit on the couch and watch our favorite shows, occasionally sharing treats. It was our practice to take a trip outside, a quartered-off section of the yard, especially designed for him to do his business in comfort and privacy. It just so happened that night, an opossum had stopped by the yard in my puppy’s spot and he found it. Chihuahuas have a reputation for being high-strung and extremely territorial, and mine was no exception. He had, early in his life, been diagnosed with a heart murmur. At age 12, he was also a little overweight, making him at least more prone to have a heart episode. So, his excitement over running the opossum out of his space did exactly that. When he came back into the house, he was acting a little sluggish. I saw him head for the room we kept his bed in and I heard a “thud” on the floor. I went in and found him laying in the floor, tongue extended, and barely, irregularly breathing. I asked my wife to call the nearest emergency veterinary clinic, which at the time was in Hendersonville, and let them know that I was on the way. I picked up my little dog and, by the time I got him to the car, he had passed.

The sense of loss I felt at that moment was easily equal to losing a human friend or relative. He had been in my home for twelve years, living pretty much like a child, with needs and wants, constantly wanting my attention and, most of the time, getting it. When I or the wife had an emotional need, he was right there with us. He basically had his own room in the house, with a ramp to his window so he could “guard” the front yard and sit in the sun during quiet times, which, if he had anything to say about it, were few. He had grooming, dental, and health appointments. He had a daily routine that had to be observed or you would hear about it.

Most of all, he loved. We were his pack. He wanted to be with us. It didn’t matter if we were sad, mad, or indifferent. I would scold him for bad behavior and within minutes, he would be sneaking up to see if the storm had passed and to see if I loved him again. I truly believe that God put dogs on earth to be examples of what unconditional love looks like. It didn’t matter who I was or what I did, I could be assured of acceptance and love from that little dog. And when you are treated that way, it is almost impossible not to love back.

I immediately swore off getting another dog. The hurt from the loss was so sharp that I couldn’t think beyond it. I was certain I could never do that again.

After a few weeks, though, I was able to think about the joy and companionship. I also thought about what his little life might have been without us. And before long I was watching the papers to buy a new companion for our little family. And a couple of months after is passing, we met Smoky.

How anyone could cup their hands around an eight-week-old baby pup and not fall in love with it, I do not know. Chihuahua puppies are so small and fragile looking that you wonder how they even survive. And we had never had one just after weening, so it would be up to us to train him to be a pack member.

So, we got to get the full experience starting at weening. Puppies have energy blasts. When they are awake, they are bundles of high energy which last for ten to twenty minutes. When that energy runs out, they pass out. Smoky would be playing full bore, then suddenly flop down wherever he was at and go completely asleep. You could pick him up and handle him all you wanted, but you couldn’t rouse him from that sleep until he slept enough to recharge. When it did, he would be wide awake in an instance and off he would go for another twenty-minute play blast. As he grew, his energy levels regulated, but it sure was funny watching him go from 0 to 60 and back in a flash during his puppy months.

A few months after we got Smoky, we bought another chi, a female, as a companion for Smoky. We got to experience all the same joys and crisis moments with her, since we got her at eight weeks as well. She had a unique latex or rubber allergy, which, until we figured out that was what was ailing her, necessitated several nights of watching her face swell up like a balloon and worrying that she might have a serious condition. As it turned out, all we had to do was keep her away from rubber toys. She was a part of the pack for seven years. We lost her to a back injury. It was a heartbreaking decision to let her go and it was the first time that we had to make the life and death decision for one of our pets. She was a bundle of high-energy joy, and it was crushing to have to let her go.

For 14 years, Smoky was that constant companion who gave us that unconditional love. And we were able to do the same for him. Dogs have exceptional hearing. When a workday was over, and I would start my 45-minute commute home. My wife would tell me that five or 10 minutes before I would pull in our drive, Smoky would stop whatever he was doing and start looking out the window. We believe he knew the sound of the engine of my car and could hear when I turned off main street (about a half-mile away) to head into our neighborhood. I believe that many of the times that we get aggravated when our dogs bark, seemingly at nothing, they are hearing what we cannot hear. Smoky did for sure. You would know when a thunderstorm was brewing by the way he acted. Didn’t need the Weather Channel. And when the thunder boomed, little Smoky would drive himself crazy looking for a place to hide. It was almost a blessing when he got older an got to the point that he could not hear the storms.

Why share this with you? Because I believe that, like me, many of you have had that special relationship with a dog or other furry family member of a different species. Pet is such a small word for the place they take in our homes and hearts. For example, many service men who have been partnered with dogs in K-9 units ask the military to let the dogs come home with them once their tour is done. The bonds are deep as they worked together, often protecting each other’s lives. The same is true for the dogs that work alongside our law enforcement officers. My sister raises dogs (poodles) that become service and therapy dogs that help those in need with physical and emotional support. We’ve read about those pets who alert families to fires in their homes and drag the little ones, the children, to safety. Remember the iconic Saint Bernard that braves icy conditions in some of the harshest terrain to rescue trapped and injured hikers? Dogs are put into service to find missing children, victims buried in rubble, and to track down and incapacitate criminals. And they do it for as little as a few minutes of tug-o-war with their favorite toy or a bite-sized treat. Most of all they do it for the companions that they love, their humans.

And I guess that is my point. Smoky lived to 14 and his heart started to fail. We were told that he might go at any time. My biggest concern was not allowing him to suffer any more than necessary when the time came, and I certainly didn’t want him to be alone when that time arrived. So, when it become obvious, and it did, we took him to the animal hospital, and we held him until the drugs were administered to quickly and finally release him from his pain and this world. He left this world where he felt the safest and most comfortable, so I believe he wasn’t afraid.

Those who are my friends and family knew that, to us, he was more then just a pet. And I know that your dog, cat, or other furry, feathered, or scaly companion is not just a pet. It is not just another tool or beast of burden. The dictionary definition of pet is “a domestic or tamed animal kept for companionship or pleasure”. That definition implies that the pet/human relationship is a one-way proposition. It is most definitely not. Like any loving relationship, it goes both ways.