COMMENTARY: Why are Native students still being hassled at graduations?

Well, graduation season is just about coming to a close for the Class of 2022 and while it seems impossible in this day and age, we are still hearing reports of Native American students being hassled for wearing traditional items.  Why?  Why in the world is this still occurring?

Native students across the country reported issues wearing traditional attire, eagle feathers, beaded caps, etc.  There were even several instances reported from members of the Eastern Band of Cherokee Indians. 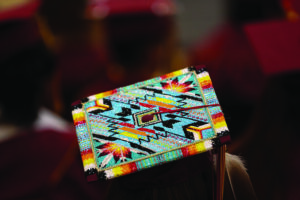 An exquisitely fully beaded cap is shown at the recent Cherokee High School graduation.  CHS encourages the wearing of traditional attire and items as graduation such as beaded caps and feathers.   (SCOTT MCKIE B.P./One Feather photo)

Why is this even close to being an issue that schools want to bother themselves with?

I would add that tribal schools, like Cherokee High School, allow and encourage their students to wear traditional attire and items.  And, it works.  It isn’t a free-for-all that some fear.  The caps are beaded by family or friends, and a lot of time goes into them.  This year’s CHS graduation was a fashion show of beautifully beaded caps and feathers.

Now, I am not going to name the EBCI students nor their schools as I don’t want this commentary to be a back-and-forth about a particular situation.  Rather, I’d like to get to the root of the problem.

To me, the problem stems from the fact that schools have policies at all.  Why have them?  It doesn’t make any sense.  While I surely haven’t read each and every one across the country, all high schools have some form of dress code.  So, just have the students follow the dress code at graduation as it relates to “offensive” or “inappropriate” attire and or items.

And, I’m willing to bet the farm that neither beaded caps nor eagle feathers are included as “offensive” in any of these dress codes.

The people making these graduation rules obviously have no idea the importance of these cultural items to the graduate and to their family.  Many times, eagle feathers given during graduations are ones that are handed down from older members of the family to honor that graduate.

My kid is a few semesters away from graduating from the University of Iowa – Go Hawks!  My wife and them have already begun designing their graduation cap which will be done in some of my family’s traditional bead patterns.  Their eagle feather is from their late lala (grandfather), who used it on his men’s traditional dance outfit and wanted them to wear it at their college graduation.

This type of family involvement is the norm throughout Indian Country and something that a lot of educators could stand to learn.

And, the good thing is that all of this can be done for my child without fear of them being hassled.

UI not only encourages students, all students, to decorate their caps; they even sponsor several events at the Student Union to help students along by supplying craft supplies, ideas, etc.  This should be the norm throughout the country in both high schools and universities.

Seven years ago, the National Congress of American Indians (NCAI) passed a resolution stating, “…the National Congress of American Indians supports the right of American Indian and Alaska Native high school students to practice and express their traditional religious and spiritual beliefs and honor their academic and other achievements by wearing an eagle feather at their commencement ceremonies…NCAI urges all schools to respect traditional tribal religious and spiritual beliefs by allowing Native students to wear an eagle feather at graduation.”

I don’t think this has to continue to be an issue for school administrators and Native students alike.  Just go by the dress code policy and use common sense when applying it on graduation day.  The last memory of a student for their high school shouldn’t be a controversy over one of their own traditional beliefs.