COMMENTARY: UNC-Chapel Hill and Henry Owl – Let’s celebrate our steps but not forget the history

Earlier this month, the University of North Carolina at Chapel Hill (UNC) announced they would be adding two new names to buildings on campus. They chose two trailblazers at the school. Hortense McClinton was the first Black professor at UNC. Henry Owl, a member of the Eastern Band of Cherokee Indians (EBCI), was the first American Indian student to attend the university. Owl graduated with a master’s degree in history in 1929, and the next year testified in front of the United States Congress to pass a landmark law that guaranteed enfranchisement for the EBCI. 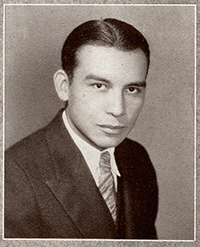 Henry Owl, a member of the Eastern Band of Cherokee Indians (EBCI), was the first American Indian student to attend the University of North Carolina – Chapel Hill which named a building in his honor recently. Owl graduated with a master’s degree in history in 1929, and the next year testified in front of the United States Congress to pass a landmark law that guaranteed enfranchisement for the EBCI. (Photo contributed)

Being an enrolled member of the EBCI and an alumnus of UNC-Chapel Hill, I was thrilled by these choices. Last year, I wrote a letter to Chancellor Kevin Guskiewicz on this exact issue, offering my perspective on why the Owl Building should become a reality sooner rather than later.

I would like to highlight Theda Perdue, professor emerita of history at UNC. In July of 2020, she submitted a letter to the editor for the Cherokee One Feather calling for this action to be taken. Perdue has had a focus on Native American history and is well-versed in Cherokee history, specifically. It is extremely important to have knowledgeable and passionate allies when fighting for equality and visibility.

The naming of the Henry Owl Building is an important step, but it’s just that – a step. As much as I appreciate the move by the university, we can’t act as though everything is hunky dory regarding our racial history at UNC. The Owl Building is only possible because the school stripped the names from four buildings last year. These being the halls honoring Charles Aycock, Julian Carr, Josephus Daniels, and Thomas Ruffin, Sr.

Owl’s name replaces that of Carr. Julian Carr was a supporter of the Ku Klux Klan, a confederate cavalryman, and speaker of one of the most infamous speeches in UNC-Chapel Hill history. In the dedication and unveiling of the now removed confederate monument that stood in McCorkle Place for more than a century, Carr stated the following:

“100 yards from where we stand, less than 90 days perhaps after my return from Appomattox, I horse-whipped a negro wench, until her skirts hung in shreds, because upon the streets of this quiet village she had publicly insulted and maligned a Southern lady.”

This language was used consistently against the statue known as ‘Silent Sam’ up until it was torn down and removed in 2018. For those more attuned to the history of the area, Julian Carr’s name is also the namesake of the neighboring town of Carrboro. Many of the townsfolk have presented the idea that a name change should be considered there as well.

This history is important. It cannot and should not be erased. Progress is extremely necessary, but it is vital that people understand where we are progressing from. It’s not as simple as etching names off buildings and waiting for the voices to die down. When we ignore the significance of our history, we become complacent. While we should take our time and celebrate Henry Owl, let us not forget that this university revered Carr for well over 100 years.

This is not all to chastise my school. I am proud of my education and forever thankful for the opportunities it offered me and for the people that I met. For those that take off their Carolina blue tinted glasses, however, there is an understanding of its dark past. Like almost every major university, there have been shady handlings and scandals. Obviously, the first to come to mind for most is the 2014 academic-athletic scandal that shook students, administrators, and fans. North Carolina University, as it was named for 174 years, was chartered in 1789 and was significantly built through slave labor. Racial inequality is woven into the fabric of an institution like this. It is part of the reason that civil rights leaders have brought such a lasting impact on the area over the last century. It is a tremendously liberal area, but it is often easy to look passed the atrocities.

As a student at the school, I’m not sure how much support I really felt. The majority of my security and sense of place came not from the university, but from my fellow students. I took part in a peer minority program that attached me to an older American Indian student. While I was excited by the prospect, it did not feel thoroughly constructed.

My first year on campus I only knew one other Cherokee student, and it wasn’t my peer advisor. I was assigned a sophomore who is of the Lumbee Tribe. Though we became friends, and it was nice to have someone a little older looking out for me, it felt somewhat forced. We never connected because of our minority status or discussions of Tribal relations, and honestly it made me have second thoughts on what my school thought about me being Native American.

I’m not trying to dig too far into my school stories, but from my experience I realized there is so much untapped potential. Truly, Cherokee could be a pipeline for UNC. Tribal Education has funded a position in the Carolina Advisor program, assisting enrolled members in college applications and preparation for the next step. The EBCI is the only federally recognized tribe in North Carolina. The Tribe is willing to expend a stream of resources to give its children an upper hand. There just needs to be more communication.

Individually, the EBCI and UNC have shown interest in each other and have worked in small partnerships. But there is not much representation in Chapel Hill. While it’s understandable that UNC wants to take a diplomatic approach and include a safe space for all Native American students, it just feels like it’s falling short of offering that to anybody.

It is my opinion that UNC needs to make a more concerted effort to offer a voice to the Tribes they serve. Each has its own traditions and history – lumping them together just isn’t cutting it. The idea of unifying the nations in one space is wonderful, and something like the Carolina Indian Circle could be a great asset for students and faculty. However, I felt isolated during my first year on campus, and I doubt I’m alone in that.

Luckily, the school took another step when I was in school and allowed Cherokee to be taken as my language credit. Taught by another enrolled member of the EBCI, Dr. Benjamin Frey, it allowed me to have that sense of place I had been seeking. These are the types of effort I love to see and that I would strongly encourage moving forward.

I am proud that my school now has one of its most important alumni represented on a building. Henry Owl was a hero for Cherokee civil rights and is a symbol of courage. I am excited by the prospect of a stronger relationship between the EBCI and UNC-Chapel Hill. There is a lot of work to be done, and I’m hopeful that this is not simply an instance of short-term appeasement.