COMMENTARY: “A Call to Arms”

Let me first say welcome to all our veterans from every branch of service, and a heartfelt welcome to your families, and friends and all those who have come from near and far to honor veterans on this day. 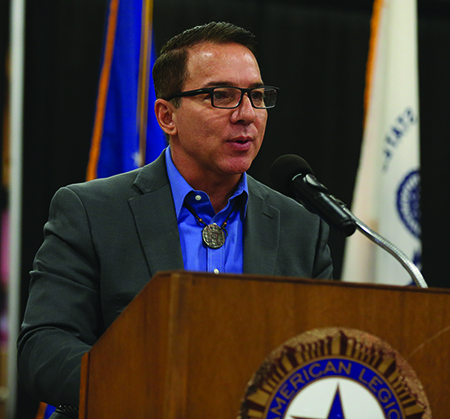 When I look around the room today, I see men and women who have served in every major conflict that the United States has been engaged in from WWII, Korea, Viet Nam, Grenada, Lebanon, the Gulf War, The war on Terror, Afghanistan, and Iraq.

As Americans and those of us who are native American, there has always been an appropriate response to the call of duty.  Whenever and wherever liberty and justice are threatened, America has always stood tall to defend the defenseless and to protect the rights of those who have no champion.

Why do we do this?   Why is America always the nation to stand tall when no one else seems to want to do so.  I believe it is because we are a nation that was founded upon Godly principles.  Not a perfect nation, there is no such thing. And if there were a perfect nation and either you or I moved there, we would ruin the whole thing with our imperfection.  No such place exists because there are people in nations and people are flawed.

But we are a nation that had a set of standards.  Standards set by God.  Standards that became our value system.  Guiding principles like, all men are created equally.  Some would balk at that and say, but America had slavery.  Yes, we did, like almost every other civilization in history. What makes America stand apart is that we fought a war amongst ourselves where 620 thousand of our people died to put an end to slavery once and for all.

A citizen has rights, but a citizen understands that with rights come responsibility.  We don’t hear too much about personal responsibility these days either, but I tell you the truth, any nation that does not teach its children the values of the nation and the responsibility of being a citizen, will not be a nation for very long.

We must find our way back to our roots as Americans.  My fellow Veterans, my fellow Cherokees, my fellow Americans, your nation is calling upon you once again.  The fight this time around is not one fought with weapons of warfare, but it is a battle for the heart and soul of our nation.

We must return to the values that anchored us as citizens, as families, as communities and as a nation.

Values like love for your fellow man, love your neighbor as yourself.

Do unto others as you would have others do to you.

Be kind one to another

These values are not dead in this country.  They are dormant and perhaps drowned out by the noise around us in the media.

The hour is at hand, and time is short, I ask you to join me in fighting the good fight to preserve and protect this nation for generations to come.